He Who Opens the Door (2022), Traverse Theatre, Review 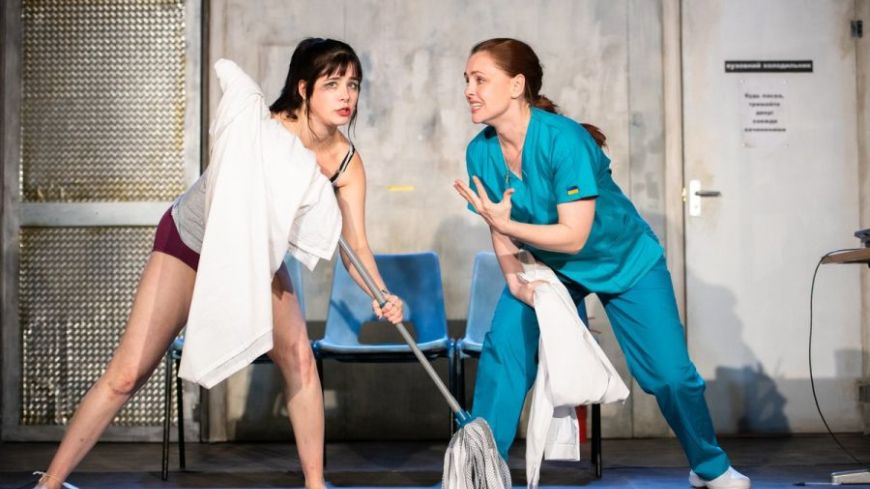 To truly emulate the agonies blistering Ukraine is something vast audiences will never truly comprehend. As each news alert of recent inflames the threats of nuclear winters and societal collapse, it grows even more complex and tenders a topic to bring to a lunchtime audience – though perhaps that’s precisely where to start.

In deciphering the environment for a Western audience, one of Ukraine’s leading playwrights Neda Nezhdana’s He Who Opens The Door manages to stage a remarkable drama-comedy set in the nation and even given its preceding writing before the onset of the current conflict, Nezhdana’s text is harrowingly revelatory.

As a hospital orderly Vera sets out to work as any other day, the mindless humdrum of paperwork and boredom sets in as she finds herself alone in the facility today. And while taking a brief respite to listen to music, read the latest gossip, and magazine-endorsed health tips - the door flings open as a young woman, disorientated, shivering, and barely clothed emerges from the other room.

Not exactly ideal to have unexpected company when working in a morgue.

Naturally, Vera faints. It seems the dead have arisen to provide one final performance, to pry open the door of living in an eternal limbo, where your politics, neighbours and day-to-day choices could lead you directly to this very morgue. The problem for these two? Those doors to the building have been locked, and a mysterious phone call offering cryptic hints is all the pair have to work with.

Gradually, the feathered line of the betwixt and between is withering away as the pair attempt to form a sense of reality amidst it all. To the extent that audiences are unsure if Vika is deceased and worse, we’re not even sure if Vera is still living.

How much information, or indeed disinformation, did either of the women internalise before their incarceration in the basement? And how little have audiences realised they knew about Ukraine before the current conflict? Louise Stewart’s hospital orderly Vera is a touch more on the naïve side of the mechanics of this all, the comedy derived from Stewart’s excellent portrayal of frustration and confusion, and the gradual reflection of the truth is a welcome move to enrich the character.

Yolanda Mitchell revels a touch more in the grimness of the comedy, and though as equally unsure as to the surroundings, the more stereotyped hungover Scot makes way for a sincere and more terrifying performance. Mitchell’s richer representation of the macabre tactics and abominable actions are an authentic realisation, delivering an almost paralysed sense of acceptance as the eventual becomes clear, in Nezhdana’s writing there is an option which is worse than death: a petrifying concept.

Out of synch, out of touch, and ever-increasingly out of time (in both respects) it’s remarkable any sense of coherency emanates from Becky Hope Palmer’s production. There is still a sense of purpose as Vera and Vika speculate on the current crisis unfolding beyond the barricaded door, there still lacks a conviction which entirely pushes the machinations of the production to audiences. While it certainly keeps audiences on the back foot, it still remains unsure of the end goal, preserved as in the dark as the pair.

A Play, A Pie & A Pint - He Who Opens the Door | Traverse Theatre