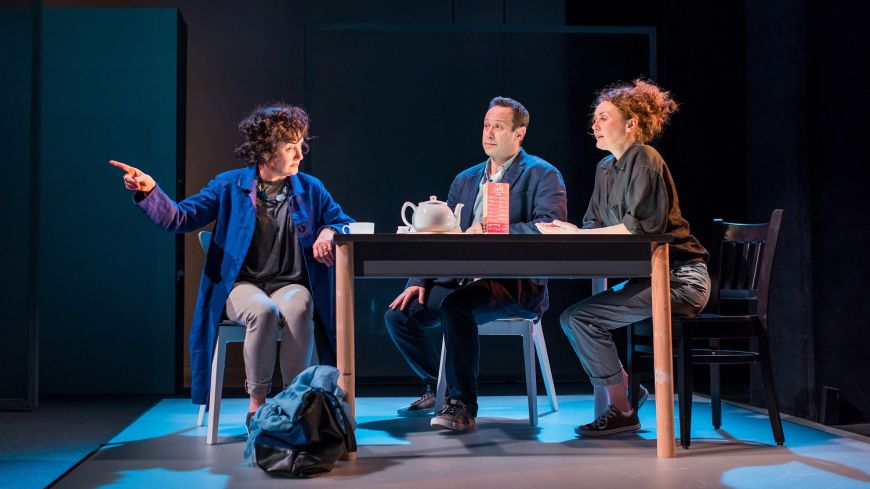 There’s a line in this début full-length original play from Frances Poet that asks “… how did we get from here to there?” This line sums up the jagged journey of inexperienced parents Maddy (Kirsty Stuart) and Rory (Peter Collins) from wine swilling West End insouciance to cynical paranoia.

Following an indulgent night away in a boutique hotel, when paternal grandmother Morven (Lorraine McIntosh) is left in charge of their 3 year- old son Joshua, the couple is sharing some intimate details with her round the kitchen table. Clearly this small family is very close. Both parents are only children with Maddy also being an orphan.

The conversation moves on to the time Gran spent with the wee boy. It transpires that in a moment of real foolishness she elects to allow a male stranger in the cafeteria queue to take Joshua to the toilet rather than doing the sensible thing of asking that stranger to mind her trays of food while she took him. What she sees as a harmless incident is the catalyst to the escalation from trust to torment among this tiny interdependent family.

Kai Fisher’s lighting dims further to chime with the play’s darkening mood as Maddy’s stress levels go off the scale on a dangerous spiral of fear and Michael John McCarthy sombre single notes strike a subtle tone of doom.

The theme of who to trust with your child in Gut is clearly a subject close to Poet’s heart, but it holds the heavy- handed feel of an educational film. The seemingly multitude of scenes and Fred Meller’s Japanese style sliding screens add a filmic sense to this 90- minute piece.

The old adage that experience is the only true teacher is what Maddy tries to use on poor Joshua, but it doesn’t apply to these characters who learn little except how to speak in clichés to each other. The result is as messy as the Lego strewn floor.

The play’s 5th character is the faulty baby monitor that features throughout but, along with the broken gate lock, never gets fixed despite Rory’s OCD, while Joshua is an invisible child till the end when, way past a small child’s bedtime, a wee boy appears on stage. Hardly worth it for the sake of a few oohs and aahs from the audience.

The play’s message may be that abusers can come in all shapes and sizes and be of any gender, but it is disappointing that women come out so badly not least for not learning from experience. This is doing a disservice to women when men, who are statistically more of a threat, are shown only as a shadowy business in the form of the ubiquitous strangers, all played with remarkable uniformity by George Anton. Other than sporting his pink shirt in a slightly different way, which may be a theatrical ploy to indicate the bland innocuous appearance of a calculating predator, he is at all times no more than the elusive Stranger.

Gut’s lack of redemption and hopelessness makes for a rather pessimistic night at the theatre.