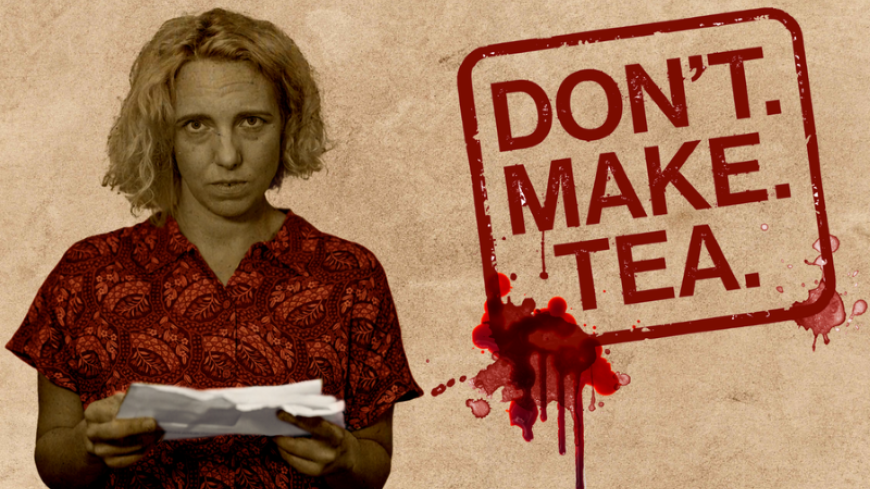 In 2030, the benefits system has had a much-needed overhaul. But perhaps not in the way claimants and those in need of it may have desired. It’s especially not an improvement for Chris, an ex-detective living in chronic pain and with increasingly restrictive eyesight and mobility. And it’s this day all the previous sessions have led to. Chris knows the game, how to answer the questions, and how to let the benefits office know precisely how vital this is to her.

But you do have to wonder. If you can kill someone, if you can move a body, then surely you can work?

Few production companies will comprehend first-hand the struggles and grievances those with disabilities are going through daily, and the limits of patience they have with government bodies not consulting or amplifying the voices of those who understand their world better. Birds of Paradise, Scotland’s first touring theatre company employing disabled and non-disabled actors, presents Don’t. Make. Tea. A thoroughly macabre and deliciously humorous lampooning of the welfare state and its callous misunderstandings.

And carrying it is Gillian Dean’s spectacularly visceral performance as Chris. Her frustrations, anxieties, and outright fears bubble over frequently – always tempered by her nerve and gallows humour. Their pacing matches the tempo of the production well, and the biting reactions to fellow cast-members Nicola Chegwin or Aidan Scott reinforce the audience's empathy with the character.

But to writer Rob Drummond’s credit, there is an effort of balance. Scott’s somehow sympathetic place as Ralph the invigilator of Chris’ benefits claims, does offer a glimmer of something as they discuss the mental block of telling and convincing yourself you’re unable to work. It further goes to the credence of Birds of Paradise that their agenda is to open dialogues, to present the world as it is – rather than take a firm stance on either side.

And never has the interface of accessible theatre been so tightly wound through the narrative - incorporating both BSL interpretation, performance, and audio description. Jamie MacDonald's AV design slides seamlessly into Kenneth MacLeod’s set piece without intrusion, conjuring a faithful depiction of what a future UK home could look like without resorting to distracting science fiction.

No longer are these relegated to the sides of the stage, as Emery Hunter provides both video feed and live onstage BSL as Francis, a manifestation of Chris’ mother. A tremendous round of applause is deserved for Hunter’s performance, maintaining the presence of a character and the focus of her interpretation for the audience.

Perhaps having a touch more glee in their role, Neil John Gibson at first takes on the voice of the Able unit, think Alexa or Google Home with an accent. The deadpan delivery and repetition provide much of the levity against Drummond’s more austere commentary on the benefits system and the dehumanisation of people. It’s vastly welcome, as is their more corporeal appearance n the second half – though no spoilers to their sudden presence in the flesh.

A notably fine script, the morose and comedic nature belays something far more terrifying – its validity. Drummond has easily crafted an intense comedy, but that’s not the purpose here. Entertainment is evident, and the laughter of the audience speaks volumes, but what speaks more is their silence. Very little of this narrative setup feels out with the realms of a near-distant future. And where the excessive violence initially plays for laughs, gradually Softley Gale’s direction knows to linger beyond the joke, for the moment of clarity to set in and offer a genuine chill in this humorous, but all too prophetic production and the extremes some people are pushed too for survival in an unjust system.