Any Given Day, Traverse, Review 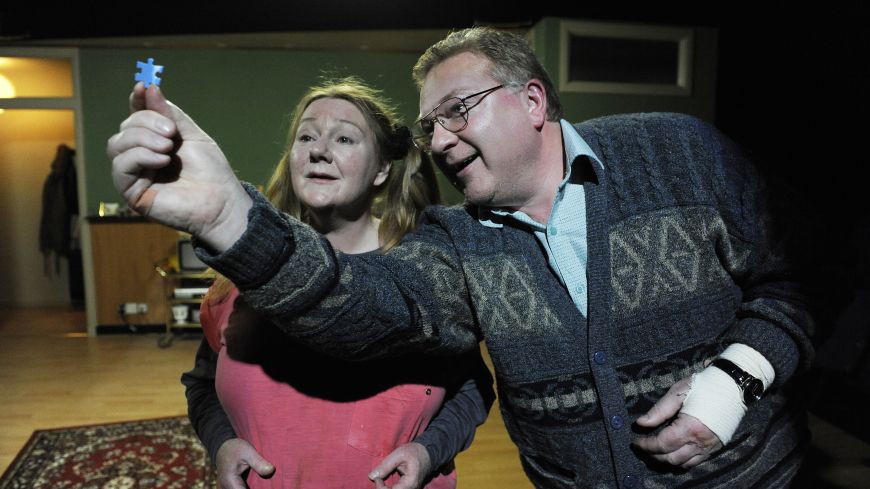 There is a familiar formula that creeps around with plays and films that deal with mental illness. The individual with the condition will fall victim to a terrible wrong-doing. They will not be equipped to deal with the situation leaving us, the audience, heartbroken and angry.

Hollywood churns out such emotionally manipulative garbage every year.

Some, no doubt, have the best of intentions at heart, but the sentimentality can be so relentless and the narrative so predictable that all life is very nearly beaten out of it.

Any Given Day, thankfully, does not suffer too much from over-sentimentality. It pokes its nose in occasionally, but the moments are so infrequent and slight that it is barely noticeable and certainly not fatal.

However, the narrative is fairly old hat.

Sadie, a lady in her forties with learning difficulties, lives in a flat with partner, Bill. They are expecting a visitor and have prepared meticulously for the arrival. But Jackie, the visitor to be, has had some unexpected news and must decide whether to take full advantage of a rare opportunity.

Like so many, as best of intentions this play no doubt has, it’s just not anything that hasn’t already been done. We know that for some reason the handicapped individual will be blessed with humour (this is an exploit of the artists not a lack of understanding from the audience). We know that something bad is going to happen. We are prepared for it because we have seen it all before. We get the message. We understand the struggle of responsibility, both to others and ourselves because we are a grown up, intelligent audience.

On the whole, the cast are very good and lift the piece above its average status. Kate Dickie is especially good as the tortured bartender, Jackie. Her performance is vulnerable, honest and full of heart. Probably the best thing about the show.

But it is not enough for an audience and an issue that deserves so much more.

Any Given Sunday is not bad. Not by a long shot. It’s just not as great as it thinks it is.