A Play, A Pie and A Pint – Sleeping Beauty Insomnia 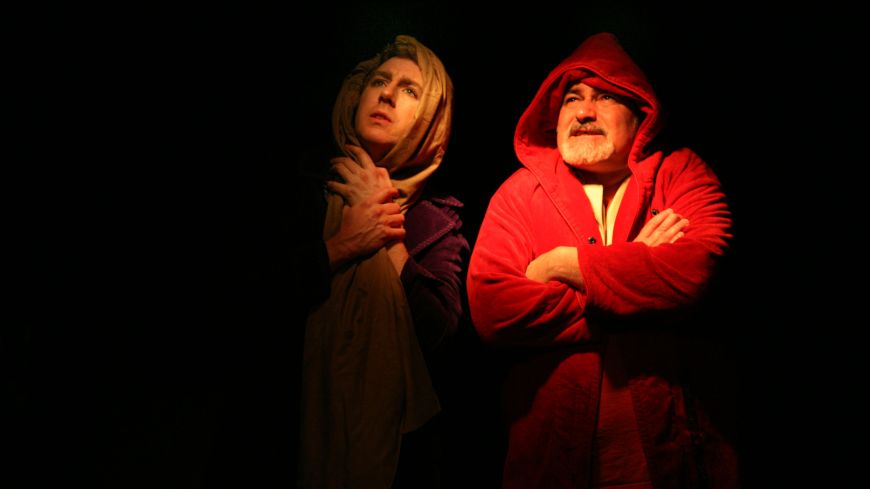 I was recently sent an article written by theatre critic Irving Wardle from the magazine Intelligent Life, where he wrote about what he called a “Fifinella moment”.  This comes from his childhood, where at a children’s show called Fifinella he experienced the very live and exciting moment where the ‘fourth wall’ in theatre is broken down. He says you experience “the physical thrill of being there and tasting the disruption.”

At today’s Beirut play, that is part of the One Day in Spring season, its writer Abdelrahim Alawji, dressed in kilt, cream flashed socks, Chelsea boots and a barra boy style pork pie hat, took the stage to introduce it, explaining that it is set in a theatre in Beirut where people used to shelter from the bombings.  Mid-sentence, there is an explosion and as he ducks away, we meet the two men who have survived the blast and there it was - a stonking “Fifinella moment”.

The set is a bomb site where the two survivors, one older man who is a former Civil War sniper (Stewart Porter) and one younger man who is a Muslim theatre studies graduate (David Walshe). They are faced with trying to survive with no access to a phone, a limited supply of food, only clothes from the costume department as source of warmth and with the increasing stench from the theatre’s dead audience, played surreally and unwittingly by the live Traverse audience.

These two opposites rub along to a point, at times singing a lullaby or reading a bed time story to help the other get to sleep. When the body of a young girl appears through the smoke of a new explosion, the dynamics shift.  Clare Gray who plays the dead girl is a fairly recent graduate but gave an assured performance, not just as the corpse, but when her character came to life becoming the conduit for these lonely men’s dreams.

David Walshe and Stewart Porter were a well-balanced duo that easily took the play from drama to panto as they showed the relationship between these uneasy neighbours, one a scared-of-the-dark, sensitive young man and one hardened mercenary old man (“If I could see you, I’d batter you.”) Major politics are condensed in to this black comedy, Alawji’s first full length play, on the consequences of the lack of love and of the utter futility of war.

Alawji’s eclectic style may not have hit the right sartorial note but this, his first full length play, hit the right theatrical one.