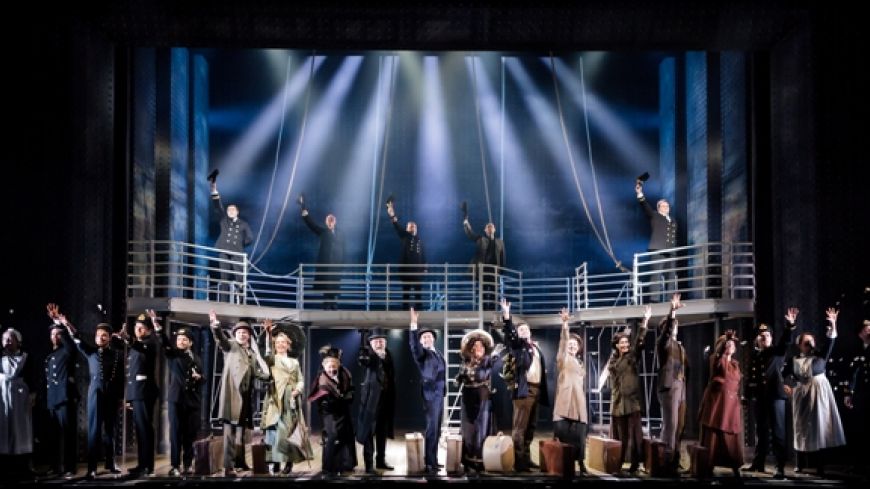 This is no plot spoiler. The Titanic, sank two and a half miles to the bottom of the Atlantic Ocean in just two hours and forty minutes after she collided with an iceberg at 11.40pm on 14th April, 1912. That is precisely the same duration as the performance of this Musical. A survivor of the disaster commented that it was like watching “ a play that was being enacted for entertainment,” The tragic story of The Titanic is indeed the stuff of pure, epic drama.

While James Cameron’s Hollywood movie was more of a romanticised, fictionalised version, Maury Yeston and Peter Stone wisely based the Book for their Musical on a group of real-life passengers, officers and crew following the timeline of the fateful maiden voyage.

The opening, quiet rhythmic chords, like Morse Code signals develops into a melodic overture, as we view the split level decking, rails and a wall depicting the hull and rivets of the White Star Liner. Embarkation day, 10th April in Southampton - a gaggle of steerage emigrants, smartly dressed Second Class guests, First Class ladies and gentlemen in haute couture. Crew members shout out “I’ll be back in a fortnight,” with a final wave.

J. Bruce Ismay, the owner of the shipping company, proudly sings about “A floating city .. sleek and fast, At once a poem, the perfection of physical engineering”. Down in the bowels of the ship, the stokers shovel coal in the synchronised routine of their hot, hard labour.

While we get the overall picture, it seems an extraordinary omission that the design does not incorporate a backdrop photograph or a video to illustrate the sleek shape and four towering funnels. This would place the well known, iconic vision of the largest ship in the world, centre stage.

The narrative focuses on a dozen or so passengers, their romantic dreams, aspirations and place in the diverse social class structure both ashore and on board. We met three young Irish girls, giggling as they catch eye of a handsome boy amongst the third class passengers, all excited about a new life where they plan to be a lady’s maid, a governess or open a shop …in America!.

There’s a bittersweet, comical sketch by social climbing, Fomo fantasist, Alice Beane who is desperate to meet the multi- millionaires, Mr John Jacob Astor IV and Mr Benjamin Guggenheim. Her long suffering husband is clearly embarrassed by her desire to dance with a first class passenger.

We witness dinner service in the First Class dining room, where the wealthiest guests enjoy five star service and champagne under the watchful eye of the Maitre d. Henry Etches .. “Mr. Astor takes his toast dry, Mrs. Straus likes the grouse, With the sauce on the side, And the Wideners love Kidney pie.”

On the Bridge, the elderly, mild mannered Captain Smith is pestered by the rather pompous Ismay who is determined that the Titanic should increase speed in order to reach New York by Tuesday. The Marconi operators are busy sending guests' telegrams while a chilling flurry of Iceberg warnings are promptly dismissed by the Master of the ship.

Sunday 14 April - a beautiful starlit calm night, as the minutes tick on towards midnight with rising dramatic tension and the actual collision is brilliantly staged with sudden, shocking effect.

Without a real sense of danger, 1st and 2nd class guests don their life preservers and are almost in party mood in a singalong: “Dressed in your pyjamas in the Grand Salon, Looks to be bizarre in the extreme...Things could improve if the steward opens the bar!...” On a more sombre note, Mr and Mrs Strauss, (owners of Macy’s, NY), cannot bear the idea of being separated, their beautiful duet, “Still” reflecting on their long life together.

Like a scene out of a Shakespearian tragedy, the four men in charge – the Architect, Thomas Andrews, First Officer William Murdoch, J Bruce Ismay and Captain Edward Smith - gather to discuss the unbelievable truth. The blame game begins: ice warnings ignored, reckless speed, the order for hard-a-starboard instead of hitting the berg bow first, too few lifeboats for aesthetic reasons, so as not to clutter up the first class top deck. The “practically unsinkable” Titanic was described as being its own lifeboat.

Hardly showing any despair or guilt, Ismay wears a mask of gentlemanly charm behind his arrogant bumptiousness. He stands in his bowler hat as if going to work in the City amidst all the panic of rope pulling as women and children are lifted into boats while husbands bid goodbye with optimistic spirit - “We’ll meet tomorrow .. we’ll be together once again.”

By focusing on the personal lives and loves, the emotion and trauma, the entire ensemble of superb actors and singers portray each character with such passion and insight. The action flows along smoothly with the rousing score performed by the six piece band.

This is a story about human endeavour, human error, faith and fallibility which resulted in the loss of around 1,523 men, women and children. Premiered in 1997 on Broadway, the award winning “Titanic the Musical” remains a powerful, poignant, truthful, and ultimately, terrifying modern opera staged with majestic realism and heartfelt theatricality.