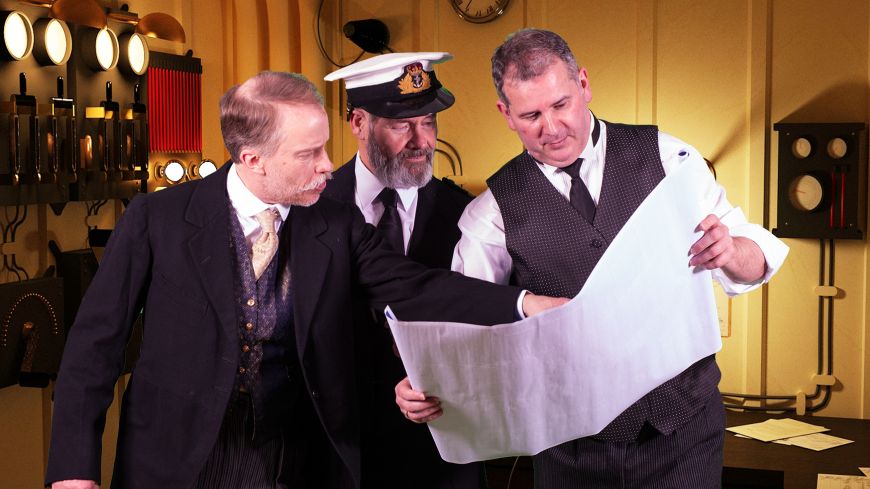 James Cameron’s epic movie, “Titanic” revolves around Leonardo and Kate's fictional doomed romance at sea to add Hollywood glamour to the worst maritime disaster in history. In the same year, 1997, Maury Yeston and Peter Stone's musical opened on Broadway, an immediate hit show, winning five Tony Awards. For their storyline, they wisely decided not to invent characters when they could dramatise the extraordinary factual plot. "Titanic The Musical" is based on the stories of real-life passengers, officers and crew on that fateful maiden voyage.

This is a timeless, tragic tale which captures the imagination. Just days into the Atlantic crossing on 15th April, 2012 the magnificent Titanic collided with an iceberg and the "unsinkable" ship rapidly sank with the loss of around 1,523 men, women and children.

The White Star Line logo, a Boarding Pass and then a flickering archive film of the Titanic are shown on a screen, which rises to reveal the quayside with gang plank, ship’s railing and red funnel. The opening, quiet rhythmic chords, like Morse Code, develops into a rousing, melodic overture. From projected text and song lyrics, we learn the facts and figures of this “floating city”, (30,000 tons of steel, a quarter of a mile long, 2,128 passengers, 20 lifeboats), the largest ship in the world.

Three separate groups of passengers arrive, first a gaggle of Irish families, emigrating to the New World, then more smartly dressed Second Class guests, followed by the First Class ladies and gentlemen, in designer couture with piles of luggage and steamer trunks. Regular crew members promise their families, “I’ll be back in a fortnight,” with a final wave before they step aboard.

But the rigid class structure prevents such socialising with the grand, gracious aristocrats and VIPs, strictly segregated by upper deck suites and private dining room. Here the Chief Steward, Henry Etches, (played with affable charm by Gary Gray), details their preferences to his staff, “Mr Astor likes his toast dry, Mrs Strauss likes her grouse with the sauce on the side, and the Wideners love kidney pie”, in a Gilbert & Sullivan-styled ditty, “What a Remarkable Age.”

We witness brief scenarios around the ship from the Boiler Room to the Bridge. The White Star line owner, Bruce J Ismay annoys Captain Smith by his insistence that the ship must reach NY by Tuesday afternoon, suggesting they increase from 19 to 23 knots. A flurry of urgent telegrams warning of icebergs ahead, Latitude 41’, are arrogantly dismissed.

As the Titanic speeds faster across the Atlantic, the dramatic pace also heats up, as the passengers dine, drink, promenade on deck and play cards in the Smoking Room. Alice, suffering severely from Fomo, tells her husband Edgar with girlish glee, “I have danced with a first class passenger” and reveals her dreams of hotels on islands, resorts with beaches. But he curtly replies that this rich man's lifestyle is beyond their means.

Supertitles above the stage indicate date and time, as the clock ticks forward to 11.39pm on 14th April, when the lookout seaman spots the iceberg dead ahead, Lat 41’ 44’ north/long 50’ 24’ West.

Without a real sense of danger, 1st and 2nd class guests don their life preservers over dressing gowns, and are almost in party mood in this singalong: “Dressed in your pyjamas in the Grand Salon, Looks to be bizarre in the extreme...Things could improve if the steward opens the bar! Oh...it's a memory I'll want to keep, Now..I would like to go back to sleep...”

Outside on the boat deck, as women and children are led to the lifeboats, husbands bid goodbye with optimistic spirit in a romantic ballad, “We’ll meet tomorrow .. we’ll be together once again” - tear jerking stuff. Meanwhile in the Wireless room, the desk has shifted over at an oblique angle, as the operator desperately tries to telegraph an SOS message to passing ships.

Cameron’s Oscar winning movie may have re-created the scale of the ocean and giant iceberg with special effects. But a stage musical emanates another dimension - genuine emotion. With minimal staging, authentic characters and realistic scenes, the story is dramatised against Yeston's majestic, mellifluous, Bernstein-esque score with such powerful poignancy.

From the multimillionaire to 14 year old bellhop, the class structure has now levelled out, both men facing the same destiny. Mr and Mrs Strauss, (owners of Macy’s, NY), cannot bear to be separated, their heartbreaking duet, “Still” reflecting on their long loving life together.

The Southern Light Opera company has brought together a huge cast (from ages c. 7 - 70+), all in good voice for choral and solo numbers, as well as fine musicianship from the orchestra.

On first night, there were moments of stiff, stilted acting, poor mumbled diction and occasional clunking scenery changes - but nothing so bad that would sink the show.

Overall the smooth direction, inventive staging, design, choreography, costumes, technical and visual effects are extremely impressive, by any standard. The superb performances are the tip of the iceberg of this ambitious production - an enchanting, romantic, truthful and, ultimately, terrifying Musical masterpiece.