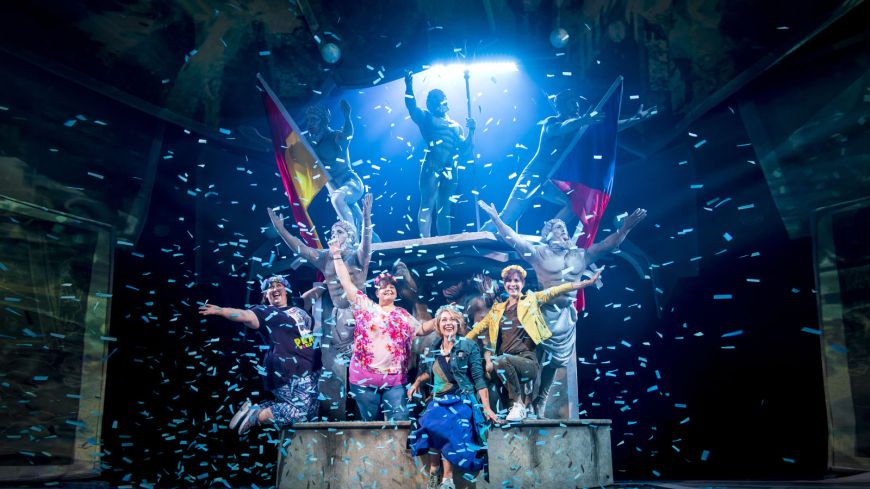 The Band is an absolute delight. It does for Take That what Mamma Mia does for Abba. In this format, however, we see the musical open on 5 tween girls in 1992 at their peak boyband devotion-- locker shrines, singing into a hairbrush, learning dances recorded from their favourite videos, the works. At first glance, The Band seems quite bubblegum, but, as we see the story unfold into the reunion of the girls 25 years later, it is clear that this is a story about love, loss, and growing up and accepting yourself.

Of course the songs from Take That take a featured role, but the real stars of this piece are the four adult women who play the tween girls all grown up. The flashbacks between both time periods are seamless and really serve for the audience to connect with the characters. The power of nostalgia is ever present, not only in the characters, but in the set-- a large installation of photograph outlines upon which are no shortage of visual spectacles from fire tricks to fog machines to projections-- fittingly, everything a pop concert should feature.

The Band of the show, the boys of Take That, act as a sort of Greek chorus throughout the entire musical, visually representing that these songs are the soundtrack to these women’s lives. Looking around at the smiles during the interval, there’s no doubt that the audience feels the same connection to this music.

Peppered with vibes of the films Shirley Valentine and Now and Then , this musical The Band will appeal to every generation, from those that grew up with The Four Seasons, to Take That, to One Direction. It is timeless, surprisingly emotional and just a whole a lot of fun. Like the musical and the music of Take That promotes, “This is the life we’ve been given, let it shine.”