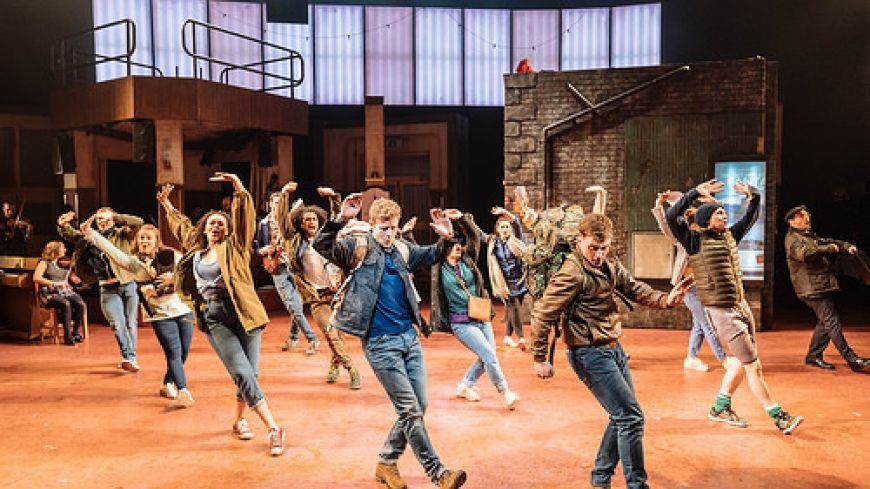 A decade on from its Dundee debut, with awards and a silver screen version to boot, James Brining and Stephen Greenhorn’s jukebox musical of The Proclaimers hits has taken on a life of its own, and this revived production will only increase the masses appreciation for the Leith twins’ melodies.

The flimsy Sunshine on Leith plot sees squaddies, Davy (Steven Miller) and Ally (Paul-James Corrigan), return home to civilian life, while Davy’s father Rab (Phil McKee) and mother Jean (Hilary Maclean) are set to celebrate 30 years of marriage when a family secret explodes and creates divides, unravelling in a classic soap-opera style and leading all players to ponder what life is all about, really.

This simple hook is enough to contrive The Proclaimers back catalogue into a plausible jaunt through love, hope and loss. Paired with Colin Richmond’s urban set of interweaving locations, gliding from the Docker’s Club to Scottish Parliament with ease, an encroaching ensemble texture the grimy brickwork and Irn-Bru ads, instilling Brining’s revived vision to create more of a feeling of community, belonging and togetherness.

Overall, the choral approach and ensemble help to reflect modern living, highlighting everyone is going through something and the world keeps on turning, while refreshing the look and feel of the show, allowing every number to peak and trough. It’s reminiscent of spontaneous sing songs in the pub which helps reflect the source material and draw in the already eager audience, although a few ensemble members are slightly too overzealous and occasionally distract from the main action.

Delivery is raw and rough-edged, to counter-act the inevitable sentimental moments, and it’s definitely a show of two halves, with the plot disseminating completely after the interval into vignettes to wrap it up, but do the audience care? Nae pal.

There’s great acting on display from the main players, who manage to evoke real emotion and perception, without too many awkward transitions from talking to singing, and while there may only be a few good voices onstage, the clever concept of inclusion means strident harmonies or squawky deliveries are forgiven, especially when they are delivered with so much energy, led by Toby Higgins’ band.

But the true star of the piece, and the longevity maker, are the songs. The clever lyrics and simple melodies of The Proclaimers traverse politics, heartbreak and belonging with an undercurrent of gusto and nerve, with a change in the auditorium felt each time the tunes took centre stage.

The audience fully embrace this rough-edged production that radiates enthusiasm wrapped up in a sentimental soap plot that all can relate to.

Until Sat 26 May 2018, King’s Theatre, Edinburgh and tour continues to: