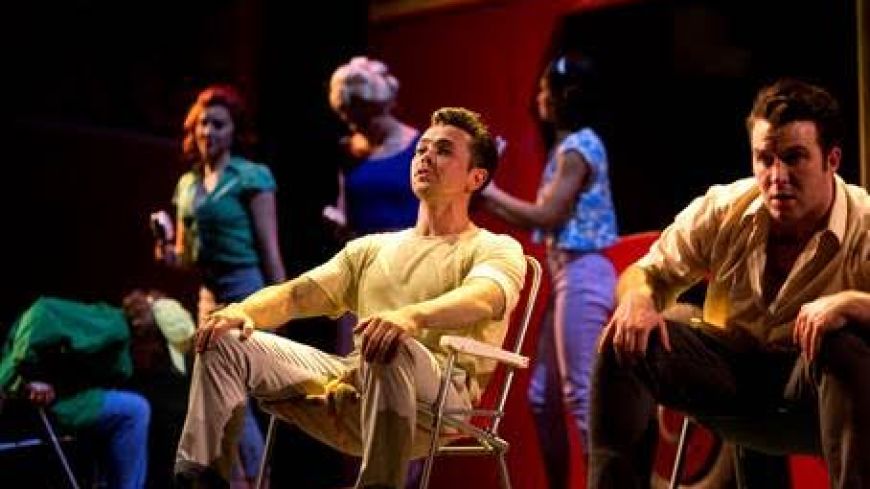 If you are weary for a break or just want to escape wall to wall football on the TV then head down to the Playhouse this week. It’s ‘Summer Holiday’ described by a perhaps biased Cliff Richard as the ‘ultimate feel good musical’

Based on the February 1963 film of the same name, the musical tracks the adventures of four mechanics who take an old London bus on tour as a very large camper van.

On the continent, they rescue three damsels in distress, a trio of singers on their way to an engagement in Athens. Further down the line they collect a stowaway dressed as a boy who is really a female singer who has escaped her overbearing mother and a hapless agent (Bobby Crush). Once the comedy is wrung out of the ‘boy’ sharing the shower room with the lads, she is revealed as the young woman who provides the love interest for Don, the leading man played by Ray Quinn. The story follows the adventures in the bus as it winds its way to Greece.

Despite being pitched at an audience predominantly over 60 years with a familiarity with the songs, this show did not appeal. That said, the majority of people around me were lapping it up, laughing at the humour and warmly applauding the songs.

If you like your musicals to have a thin and cheesy plot then you will be in your element! The London bus moving around the stage is the main staging highlight and the fact that the director is also the choreographer indicates where the main strength of this production lies.

Ray Quinn demonstrates that he is equally at home dancing on stage as on ice and as a leading man he commands the stage throughout.

The supporting cast are all good dancers and it was interesting to hear songs associated with Cliff Richard delivered by female voices. The music is mainly pre-Beatles and perhaps demonstrates why the world was crying out for something new. The dancing was slick, but to my mind the whole show seemed to remind me of a pre-war musical.

The relatively short show was extended by an encore of six songs that had the stalls on their feet in acclaim.