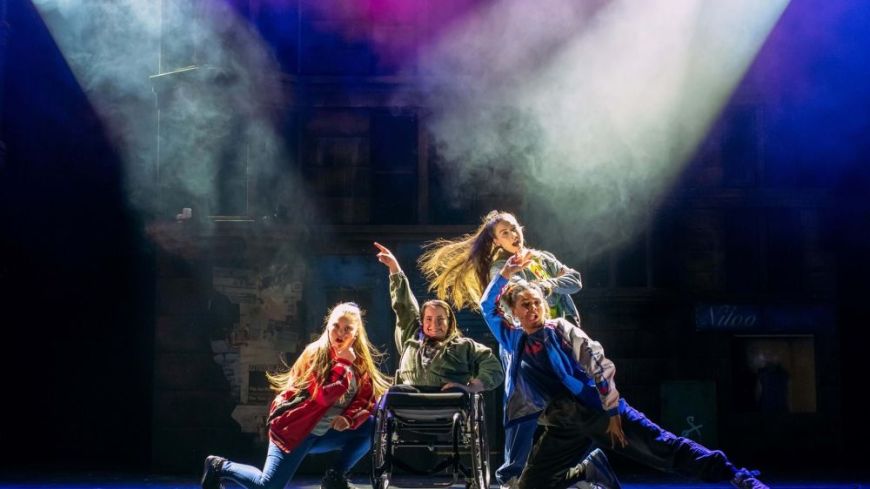 Adapted by Douglas Maxwell from Peter Mullan’s 1998 cult-film by the same name, Orphans is a ballsy, darkly comic and proudly Scottish musical created by the National Theatre of Scotland, directed by illustrious Cora Bissett.

Set over the course of one stormy Glasgow night, four adult children struggle in the wake of their mother’s death. Eldest brother Thomas, righteous and religious, won’t leave the church. Frustrated sister Sheila fights for her independence. John has a thirst for revenge (and, unfortunately, a gun). Michael is bleeding from a bar brawl and trying to stay awake. Duty and regret ultimately give way to strength and forgiveness as we witness how grief reveals the fierceness of family when a parent is gone.

Music and lyrics by Roddy Hart and Tommy Reilly are catchy and clever. You will be singing the songs after the exiting the theatre. Numbers like Right Where You Belong evoke that same wistful Celtic folk hook that one would find in Tidelines’ Far Side of the World and rousing rock influences as well as driving electro pop make up the score.

Fight choreography (Paul Donnelly) is smart and slick while powerful direction by Cora Bissett brings out vulnerable performances from all on stage. The character work here is sublime; the episodic ensemble moments that add community colour to the piece are joyous; the paper girls are a highlight with Chloe Hodgson as Bernadette especially hilarious.

Reuben Joseph as Michael is a captivating actor, and each of the four siblings exude a strong-willed performance, even biting at times, but ultimately tempered with tenderness and empathy for one another and their individual expressions of grief. The essence of the show is quite deep, but it cannot be stressed enough just how funny it is.

At three hours, the piece is a bit too long, but, hey, it’s juggling many different plates: catchy, true musical theatre, poignant and unique story, measured adaptation and pure Scots banter, four-letter words and all.

A 2017 study titled Frankly, We Do Give a Damn: The Relationship Between Profanity and Honesty found a strong correlation between swearing and honesty. If that’s true, then the characters in Orphans should sit on every jury. Joking aside, the show has an explicit label on nearly every song in the soundtrack on Spotify, and with raucous titles like Every C*nt Should Love Every C*nt it’s no wonder why. Vignettes peppering throughout the main plot permit playfully indulgent near-stereotyping, the unapologetically “colourful” language faithfully demonstrating Billy Connolly’s “poetic and violent” description of Glaswegian swearing.

Overall, and cursing aside, Orphans makes a satisfying showcase of Scots language and dialect that disnae resign itself to character roles and side plots, as seen in too many other productions or works of mainstream entertainment; it boldly takes centrestage in a popular, and in many ways traditional, theatrical product, seen especially in ballad Safe With You, where Robert Florence as Thomas takes a signature Rogers-and-Hammerstein-esque baritone soliloquy to modern and beautiful heights, with a touch of light-heartedness and humour.

With Orphans, National Theatre of Scotland have paid respect to real and diverse Scottish stories profoundly told in true Scots voice, a sincere and pointed placement on a scale more visible than many will have seen before.

Dinnae miss it!
Orphans heads to Eden’s Court in Inverness 26 - 30 April. Worth the trip!