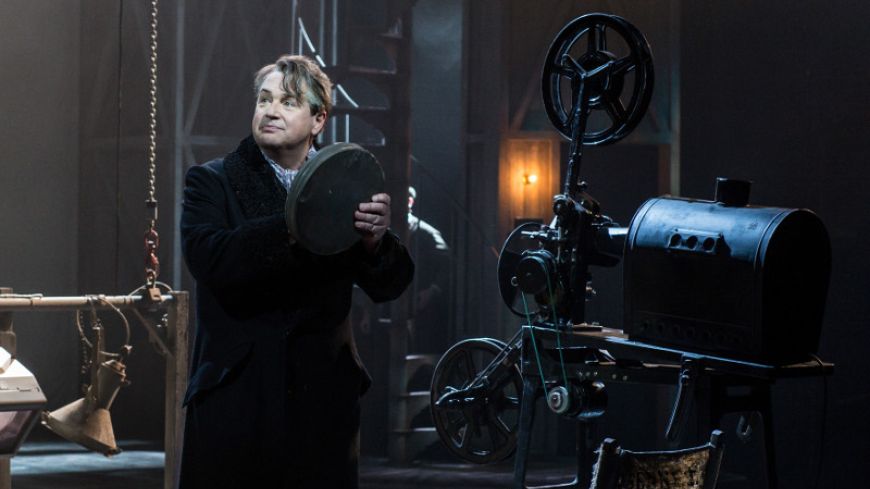 They came to see Michael Ball, they got Mack Sennet. Best known for his singing, Michael Ball’s characterisation of Mack shows what an excellent actor and performer he is. Up to the point that he starts to sing you might wonder if it is someone else, such is the transformation in appearance from the matinee idol to washed-up movie director.

Set in the days of the silent movies, Mack is obsessed with making movies and making people laugh, in equal proportions. His relationships always come second and even when he meets the young woman that becomes his photogenic and comic star, she is clearly told in the memorable song ‘I Won’t Send You Roses’ exactly what Mack can and won’t give.

This Chichester Theatre production, for which Ball played a significant part in its creation, uses up-to-date methods to turn a musical play into a musical worthy of the name. The combination of scenes shooting movies and transferring them to the screen is not unique, but in this case very effective.

Rebecca LaChance chosen especially for her ability to come across on the screen as well as the stage plays Mabel, the Queen of his most successful movies and she has the combination of age, looks, as well as being a performer who looks to have a bright future on Broadway and in the West End.

While Mack is hardly off stage, he does give way to the scene when the Keystone Kops reproduce the kind of routine that was stock in trade of the ‘Silent Era’. It is absolutely brilliant and well worth the visit to see it alone.

The musical has a full orchestra and the overture sets the tone for a quality production. The show is reminiscent of the all singing and dancing musicals of yesteryear and Michael Ball certainly leads an all-round excellent company without a weak link.

A special mention of Jack Edwards as Fatty who deserves to be further up the cast pecking order for his nifty footwork.

The show is suitable for all ages apart from a few naughty words and some of the characters snorting interesting, but unnamed substances.

Great music and choreography and a tour de force by Michael Ball as ‘Mack’.