It's a Wonderful Life - the musical, Pitlochry Festival Theatre, Review 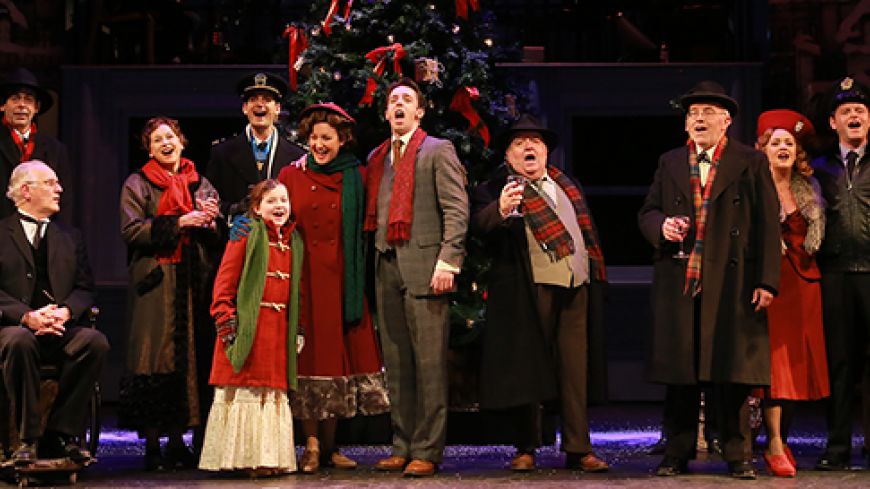 The movie to define all festive entertainment, “It's a Wonderful Life”, Frank Capra’s classic 1946 black and white film starring James Stewart is always worth an annual viewing in December. Christmas wouldn’t be Christmas without it!.

But did you know there is a Musical based on the film and the original story by Philip Van Doren Stern?. With Book, music and lyrics written by Thomas M Sharkey, it was first staged in December 1987 at Howard Cobbs' Gaslight Dinner Theatre, Memphis.

This production at Pitlochry Festival Theatre marks its Scottish Premiere.

It tells the saga of George Bailey, a kind, generous citizen, a universal Everyman, in the small town of Bedford Falls, whose youthful plans for adventure have long been quashed by other people’s obligations.

Wholesome and homely, it portrays American family life in the 1930s and 1940s with a seasonal message of goodwill akin to The Christmas Carol.

With a six piece orchestra performing on stage, the ensemble cast dressed in neat vintage costumes, colourfully capture the period setting. This is an intimate operatic-style musical with a flowing score and emotional lyrics which drive the plot along.

As the unseen Narrator, Joseph, a heavenly supervisor of angels has chosen Clarence to help save George Bailey from suicidal despair on Christmas Eve in order to earn his Guardian Angel wings.

John Jack is quite brilliant as George from teenage schoolboy to young man, husband and father. Through fast moving vignettes, we see how he sacrificed personal ambition to settle down with childhood sweetheart Mary and take over his father’s Bank.

Distant trains whistle on their journeys elsewhere, while he dreams in vain to travel the world.

It’s a bittersweet, romantic story with beautifully sung duets such as “Three Walls and a Ceiling” and ”All the World to You”. The light musical style is reminiscent of Rogers and Hammerstein, blended with Kander & Ebb and a dash of Lionel Bart.

Comic episodes too feature Uncle Billy as he deals with the devious devil of a banker, Mr Potter. And Niamh Barlow is a little star with her confident performance as George’s daughter Zuzu.

And so by Act II, we return full circle to Christmas Eve when George is facing financial disaster and personal disgrace. In a filmic scene worthy of Capra or Hitchcock, he stands on the towering steel bridge high above an icy river.

It is now up to Clarence (portrayed with uncanny spiritual charm by Robin Harvey Edwards) to show George a vision of his extraordinary, selfless life, to prove what would have happened to the residents of Bedford Falls, especially his family, had he never been born.

The life-affirming Dickensian story is an emotional tearjerker about friendship, love and redemption.

Directed and performed with dramatic pace, music, song and dance, this is a magical, feel good, festive Show. Moreover, this "wonderful" Musical retains all the warmth and pathos of the iconic Christmas movie.