Crazy for You, Edinburgh Playhouse, Review 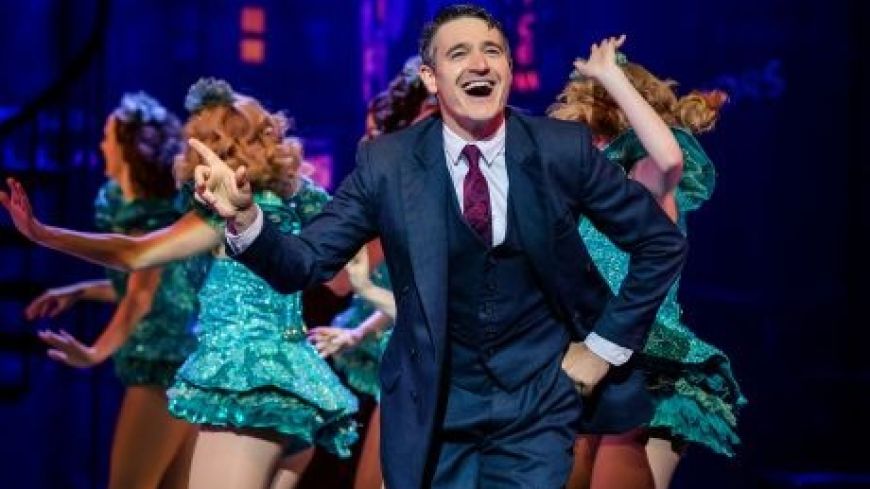 Born from George and Ira Gershwin’s 1930 musical Girl Crazy at the height of Depression-era escapism, the parallels are not lost that this 2018 tour of Crazy For You occurs during another demand for escapism in the present era of political tumult and economy-rebuilding. And there’s nothing more escapist than a night at the theatre...red velvet seats, the hush of the crowd dying down as the overture of Rhapsody in Blue begins to play out on flute. While Crazy for You premiered in 1992 to great acclaim, these Golden Age of Broadway tunes are hallmarks of the quintessential American musical theatre repertoire today.

This musical revue of sorts honours these classic songs by weaving them through a story of Bobby Child, an aristocratic banker on the surface, but a daydreaming tap dancer underneath the suit. Child longs to dance in Ziegfie-- ehhem, Zangler’s Follies in his town of NYC, but his pushy fiancee and stifling mother have other plans. He’s sent off out into the American west to sweep up a theatre that’s defaulted on its mortgage, but instead of reclaiming it, he stays to try and bring The Gaiety back to life. Oh, and the driving force behind this revitalisation? This city slicker has fallen in love-at-first-sight with this tumbleweed town’s Venus of Nevada, Polly Baker. She’s a spitfire, he’s a hopeless romantic, and they’ll tap, waltz, and sing their way through numbers like, Embraceable You , I Got Rhythm , and Nice Work If You Can Get It with mischief, heartbreak, and joy.

The outstanding part of this production is the constant flow and choreography of actors that sing, dance, and play their instruments live on stage. The Watermill Theatre is unique in that it maintains a commitment to actor-musicianship in their productions, and seeing a row of Follies Girls shuffle-ball-change into a complete brass band feels absolutely electric.

While this impressive step up in presentation certainly elevates this musical, Crazy for You unfortunately, falls into the musical revue trap where the music, no matter how classic and expertly played by actor-musicians, doesn’t salvage the fact that a plot is loosely strung together behind the song showcase, a characteristic that should have remained in the early 1900s Follies tradition instead of written into more modern musicals. To add salt to the wound, Crazy for You doesn’t manage to escape the dated script and cheese factor that comes with classic musicals. But, hey, a little cheese never hurt anyone, especially with talent at the helm and especially if you love a musical as light as Fred Astaire’s feet.

Speaking of Astaire, he’s certainly remembered in Tom Chambers’ performance, the stand out title character from this production. He’s goofy, nuanced, and an expressive dancer, a bit nasal when singing, but in an endearing, likeable way. Chambers’ manages to coax more quirky character development from his Bobby Child than all the other performers combined, and it’s charming. Together with Charlotte Wakefield as Annie Oakley-esque Polly Baker, the two of the dance up the sort of stuff that modern day La La Lands are made of.

Wakefield is a knockout in this performance as Polly Baker, with an excellent American accent to boot. Intonation, check. Personality, check. Dynamics, check. A vocalist in command of her mix and belt, and a dancer that does Ginger Rogers proud.

Crazy for You at the Edinburgh Playhouse is an elevated production of a possibly outdated musical, but beauty is in the eye of the beholder. If you, like Iris from The Holiday , are looking for corny in your life and dream of escaping into a Rogers/Astaire world, this musical is for you. Really, this musical at its core is about creating something from nothing, about salvaging a theatre and keeping the traditions that have gone a bit dusty alive and new, and the multi-talented company at Watermill Theatre certainly has done that.