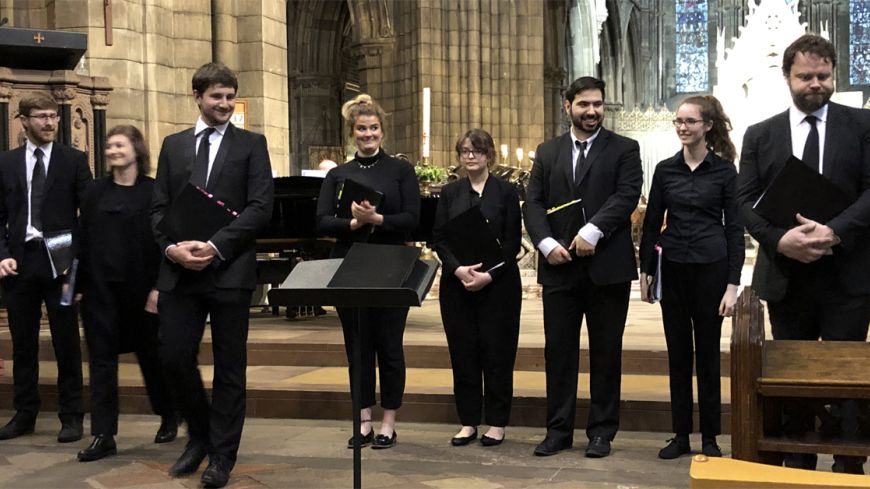 The few words of introduction by the conductor, Cole Bendall, were particularly helpful in describing what the high-flying Reid Consort had planned for us. Together with co-concept makers Alicia Pettit and Harold Raitta, he had created a pastiche of music and poetry suitable as a requiem to someone who had died. The really helpful introduction in the programme explained the difficulty of providing a complete work of music for a religious service partly because of local practices and requirements. We were to hear their work in progress, Cole explained.

To set the mood we heard a plainsong introit behind us. Shortly the three sopranos had moved to the stage to be followed by the other nine - altos, tenors and bass. Herbert Howells and Maurice Duruflé followed. The piano had begun to accompany the singers. And then the first poem from Moishe Kaufman 'I don't want the golden goblet; the wine is better'.

The piano accompanied Pizzetti's Dies Irae and the livelier Mozart Confutatis and Lacrymosa before we heard read an excerpt from Simkha Shayevitch's Song of a Mother. The sopranos and altos gave us Julia Seeholzer's unaccompanied Pie Jesu before all twelve sang Parry's There is an old belief. Slight confusion reigned as to whether there needed to be an interval, but three minutes was allowed for the singers to catch their breath.

Brahm's familiar Wie lieblich sind deine Wohnungen began the second half followed by a male voice reading an excerpt from Kindertotenlieder by Friedrich Ruckert. I particular enjoyed Luis de Victoria's Agnes Dei before listening to a female voice reading R. L. Stevenson's Requiem. The sopranos and altos sang Carol Barnett's Lux aeterna to be followed by the short but full bloodied Stravinsky Libera me with its conversational backing. A female voice read Scott-Holland's Death is nothing at all. New to me and much enjoyed was Eliza Gilkyson's Requiem. We missed the programme's Tennyson and ended with Fauré's In Paradisum.

The concept was a winner and the performance likewise.