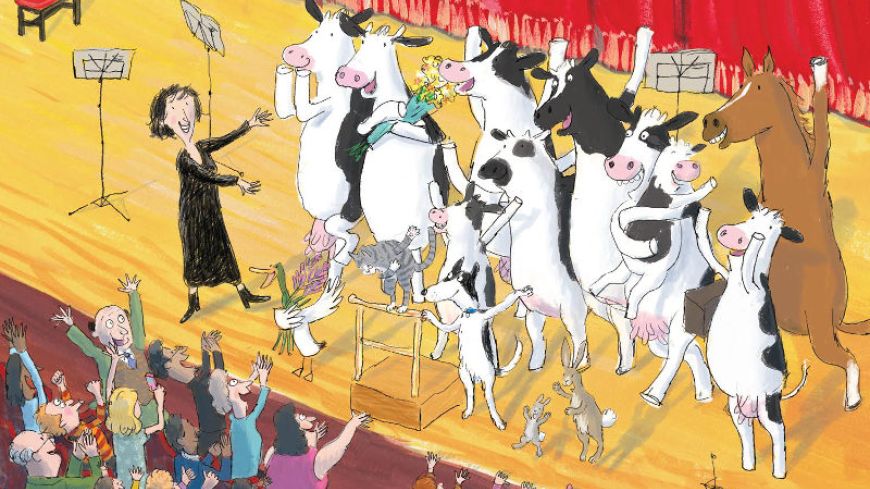 The Scottish Chamber Orchestra annual fun Family Concert was held on Saturday in Edinburgh’s Assembly Rooms. This year they premiered Jason Chapman’s story called Stan and Mabel with an original score composed by Paul Rissmann. The place was packed with families and children ranging from ages four to eight.

Before the concert began the large room upstairs was set aside for children to make masks of the characters involved in the show – Stan, the dog; Mabel, the cat; the horse and cows. Also in the room was a variety of instruments the children could play, all light especially made for children. The SCO have a good outreach department and frequently visit schools around Scotland so they are adept at dealing with curious children and patient when demonstrating how the instruments work. And children enthusiastically experimented with instruments from all sections of an orchestra – brass, woodwind, strings and percussion.

When we were settled in the ballroom for the concert, members of the orchestra began to take their seats. The musicians had dressed up for the occasion – many of the women were in ball gowns and the men in DJ’s. Whiskers were added to the outfits and even Geoffrey Paterson, the conductor, had a fluffy tail pinned on the back of his white dinner jacket.

For the children to appreciate the sound of a full chamber orchestra they first performed Rossini’s rousing William Tell overture. I glanced round and noticed many of the children appeared to be overawed by the sound the musicians made.

Next on the programme was the tale of Stan and Mabel. Chris Jarvis came bouncing on to the platform to narrate the story and encourage audience participation in group singing relating to the tale which centred round Stan and Mabel’s adventure to the La Scala opera house in Milan to perform in an orchestral competition. They picked up a bassoon playing horse and a string section of cows. To their delight their animal orchestra won the competition which concluded such a fun concert for the children.