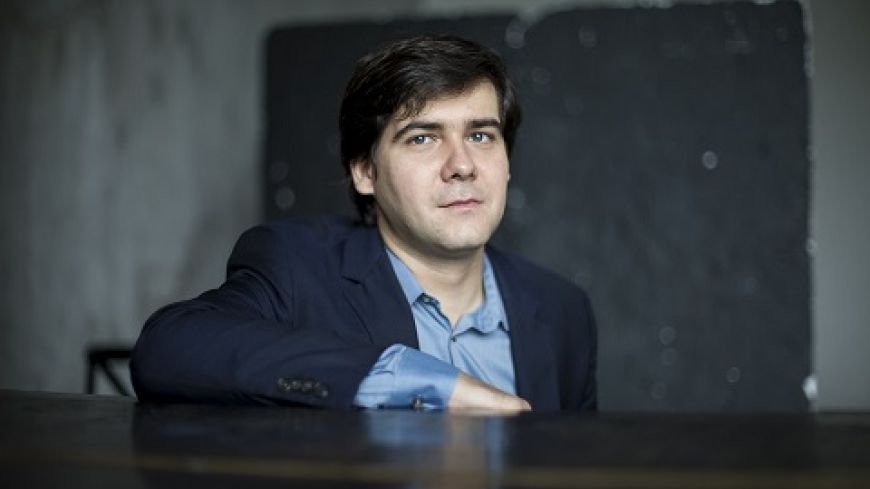 Arnold Bax was commissioned by Henry Wood to write a trilogy of tone poems. Our concert began with the one in the middle, In the Faery Hills, inspired whilst the composed was under Mount Brandon in south west Ireland with his copy of W. B. Yeats's poetry opened at The Wanderings of Oisin. We were taken into a world of fairies darting up and down in the Irish countryside much helped by two harps and into which Oisin is drawn. First performed at a promenade concert in 1910, there's a recording available made many years later by the Royal Scottish National Orchestra. It was welcoming music under the baton of Thomas Søndergård who thought it unnecessary to add any further words of welcome.

We might have expected the piano concert next, but instead a symphony with a light cheerful touch which was Shostakovich's Ninth. It first appeared late in 1945 and was expected to be a heavy celebratory choral work at war's end. Banned for a while because it did not meet these demands, it continued our concert's theme of a light and airy and fun to watch half-hour-long symphony - and a chance for some of the Orchestra's principal players to excel.

The serious work of the evening came after the interval when Vadym Kholodenko was at the piano, and paying only his second visit to the Usher Hall, to perform Rachmaninov's Third Piano Concerto. It has the reputation of being the hardest of the composer's piano concertos to master - but Vadym Kholodenko brushed this aside when asked about it at the pre-concert talk. His performance was masterly and a joy to watch. In his early thirties and born in the Ukraine, it was Alistair Mackie's well thought through questioning at the pre-concert talk which tried to extract from the pianist quite why his training and that of many others at the Moscow State Conservatoire produced such excellent pianists. Intelligently and politely he failed to rise to this and several other challenges. It was a very great shame to many of us in the Upper Circle Bar that the Orchestra's Chief Executive and guest sat at a table at the front so we could not see them, and employed a sound system far from adequate. I just about heard the twenty minute exchange - but facial expressions would have added so much; I'm afraid many neither heard nor saw.