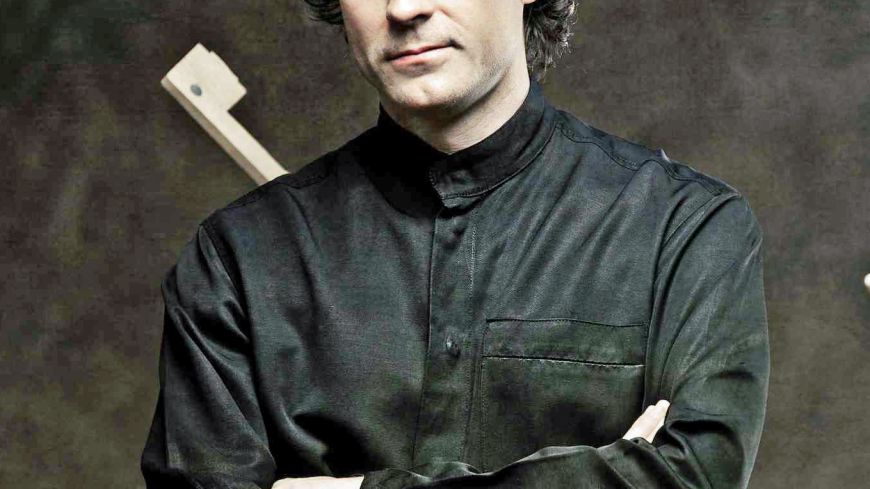 At both the otherwise fascinating pre-concert talk and again in the conductor's opening remarks we were given the hard sell. The great fear, it seemed, was that we would not like the opening work. Appropriately it was called Con brio - with vigour. First performed in 2008, Con brio is Jörg Widmann's combination of traditional classical with contemporary and written specifically to accompany a cycle of Beethoven symphonies. A lady asked the conductor at the pre-concert talk why he called it a spoof - was this disrespectful of Beethoven. Far from it, came the reply - he was paying great respect.

In Con brio we were told to look carefully at one or several players to see just how differently they played their instrument. Violins being played on or even below the bridge, wind instruments blown but with no finger movement, others banged at the bottom, and the revered tympanist banging his sticks on the hard side and then, at the end, stick hitting crossed-over stick high up for all to see. There were recognisable moments of Beethoven but fewer that expected. The pre-concert talk advice that this was a work probably best listened to a second time seems a good summary.

It took just three minutes to wheel the stately grand piano to front of stage to welcome Paul Lewis for Beethoven's Emperor Concerto. Liverpool born and awarded the CBE recently, he is enjoying a spectacular international career. The ease and confidence with which he played the Emperor was a delight to both ears and eyes.

Dvorák conducted the first performance of his Seventh Symphony in London in 1885 - written for the struggles of the Czech people against political oppression. The calm second movement really allowed us to soak up masterly flute and oboe contributions.

Romanian-born Cristian Măcelaru brought with him not just an enlivening and entertaining discussion at the pre-concert talk but an overall impression of happiness. His conducting career jumped ahead when he took the place of Pierre Boulez just before a Chicago Symphony Orchestra concert in 2012. He told us how highly he ranks the Usher Hall, so lets hope he'll be invited back.