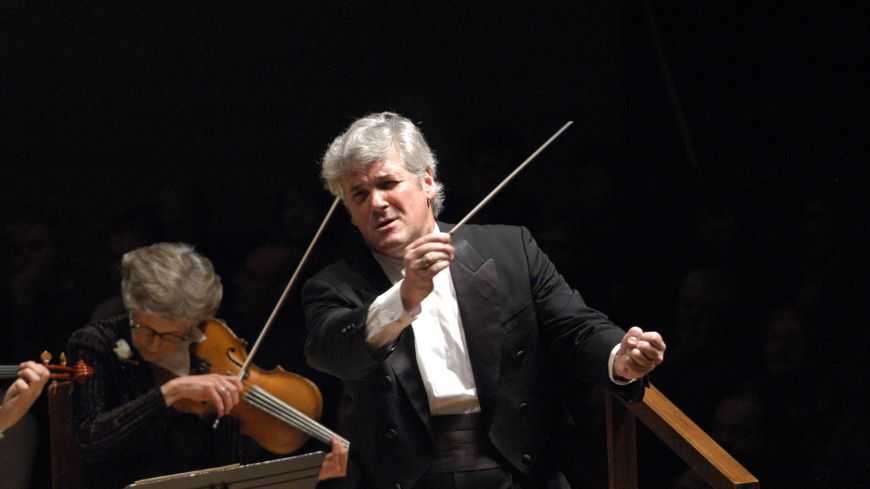 The Royal Philharmonic Orchestra performed this Sunday Classics concert at the Usher Hall and it was conducted by the world renowned versatile, virtuoso musician Pinchas Zukerman who has been the RPO’s Principal Guest Conductor for the past decade.

Brought up in Israel, Zukerman was a child prodigy and has been playing solo violin and viola on the concert platform for over fifty years and has won numerous awards. Conducting is also an integral part of his musical life and with his controlled, minimalistic conducting style he has developed an obvious rapport with the musicians in the Royal Philharmonic Orchestra.

The concert opened with Vaughan Williams 1910 work for string orchestra ‘Fantasia on a Theme by Thomas Tallis’. Williams was inspired by the music of the English Renaissance period and the title takes its name from the sixteenth century original composer of the melody, Thomas Tallis. Scored for a string orchestra – with additional players who are specifically placed apart to form an echo to the main orchestra (in the Usher Hall they were elevated onto the stage where the choir perform) – the ‘Fantasia’ is a perfect vehicle for the musicians to exert their musical talents as it has an abundance of lyrical passages varying in tone from the sublime to the dynamic.

It starts on a tranquil note with whispering strings and gradually we are taken on a magical, musical journey which occasionally features the talents of the principal viola player, Abigail Fenna; the principal cellist, Richard Harwood and Duncan Riddell, leader of the orchestra. It was a moving introduction to the concert.

Next on the agenda was Elgar’s ‘Enigma Variations.’ Elgar could be described as the quintessential English composer and his famous ‘Enigma Variations’ was inspired by comments his wife made when he was relaxing at home playing a melody on the piano which intrigued her.’ Elgar decided, after her comments, to write a composition that would musically interpret his close friends’ idiosyncrasies and the result was his orchestral ‘Enigma Variations.’

Comprising fourteen variations on an original theme, each variation represents a musical sketch dedicated “to my friends pictured within.” It must have been intriguing for his friends to discern who was who in the variations although one, at times, can readily interpret the personalities – philosophical; strident; carefree. As the title suggests there are a variety of orchestral emotions involved in this composition and the musicians excelled in the interpretation, particularly the brass section, who’s playing was impeccable. And as an ensemble, with Zukerman’s conducting skills, they created an impressive interpretation of this classic composition.

The final work on the programme was Beethoven’s violin concerto. It was the only violin concerto he wrote and it was at a time when he had lost sixty percent of his hearing. Zukerman was the soloist, and what a soulful interpretation he gave of this emotionally charged concerto.

Geothe described Beethoven as ‘an utterly untamed personality’ but Beethoven transformed his turbulent emotions into the most magnificent enduring works – including his violin concerto. And what an accomplishment it was for Zukerman to perform, and conduct, this concerto.

Over many decades, I have never seen a string soloist conduct an orchestra as they perform. The lengthy introduction to the concerto involves only the orchestra, so, quite rightly, Zukerman faced the orchestra and conducted with his bow – violin in the left hand, bow in the right. When it came to his solo parts, he turned, faced the audience and started to play - but of course you can’t specifically conduct when you are playing your instrument.

However, his rapport with the orchestra is so good, that the musicians were able to interpret his every signal and Zukerman’s interpretation was sublime.

He played the concerto as if it was as familiar to him as breathing and in the middle movement he played with such sensitivity one almost had to strain one’s ears to listen.

It was truly a memorable performance and he, along with the orchestra, received a well-deserved rapturous response.