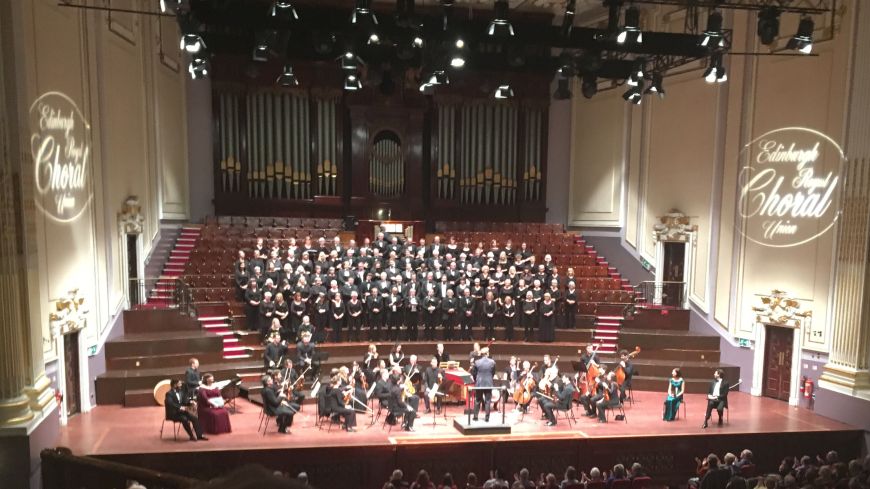 The Usher Hall was all but full for the Edinburgh Royal Choral Union's 131st Annual New Year performance of Handel's Messiah. Although Handel lived in London he decided that it should have its first performance in Dublin in 1742. In the days when Chester was no longer a deep enough port and before Liverpool had taken over, Handel sailed from Parkgate where he had stayed at its George Inn. Messiah was extremely well received in Dublin, but a year later in London the reception was not so enthusiastic.

The work's popularity grew and Handel made alterations as it went along. This has allowed conductors freedom to create their own version. Edinburgh Royal Choral Union had their first experience of conductor Benjamin Bayl. He holds both Dutch and Australian nationalities. To augment the concert's Edinburgh Pro Musical Orchestra he added horns and had a trumpeter in the Grand Circle in Part One. But although the Orchestra was small, the chorus was of over one hundred voices - and impressive they were.

Sung in English without a story, Messiah is a collection of passages from both Old and New Testaments of the Bible which consider the life of Christ. Written for the stage although religious, tradition was kept in the Usher Hall when the entire audience stood at the end of Part Two for the Hallelujah Chorus.

The four solo voices were very satisfactory indeed, and because no one outshone the other. This allowed us to enjoy their singing rather than individual personality traits. I enjoyed watching hard working David Gerrard on the chamber organ immediately in front of the conductor, and compared his score with that of John Kitchen on the Usher Hall's mighty organ high above the singers.

The concert had started at noon, just as it had for its performance in Dublin. We were encouraged to bring a packed lunch for the thirty minute interval. Walking about, this was sensible Edinburgh with plain simple fare shared among friends, and not the I've-got-a better-champagne-than-you Glyndebourne.

A really good concert to start the New Year. And why did I mention the George Inn in Parkgate? A hundred years later it became a well known boys preparatory boarding school which I entered in 1955 and learned all about Messiah from the age of eight.