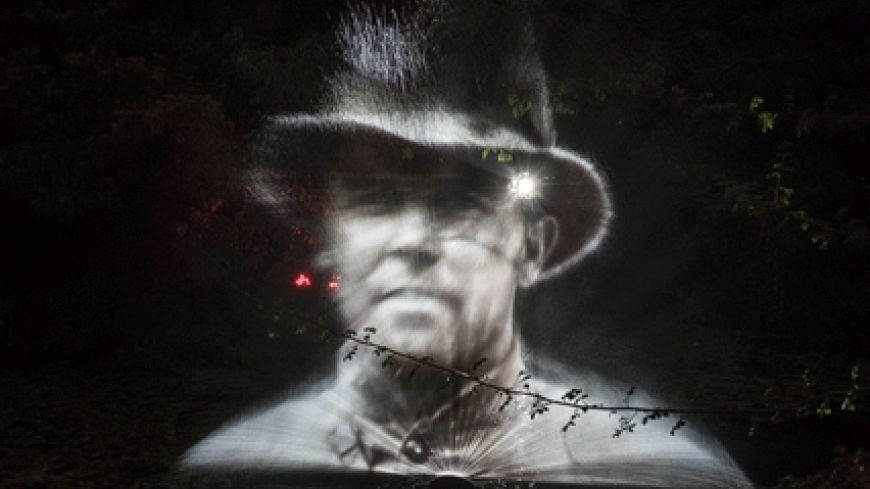 As the skyline darkens, strange sounds and glimmering lights come from the Royal Botanic Garden.

It’s time to explore – that’s the theme of this year’s Botanic Lights event; an illuminated trail that takes a global journey, showcasing and transforming the plant collection.

We follow in the adventurous footsteps of the Garden’s own Indiana Jones, the legendary plant collector George Forrest. In the heyday of the British Empire he travelled to the Far East, bringing back hundreds of species, many of which can be found in the Garden, and more than 31,000 specimens for study.

A green and purple hued grove with firefly flashes leads to huge illuminated letters – an invitation to explore the transformed Garden. In the Chinese Hillside we catch up with the man himself as the image of George emerges out of mist and spray above the pond. Here there are dragons too, twisting and turning in the projected landscape, symbolising both the traditions and the dangers that would see him fleeing for his life.

There is a base camp of a handily located hot Pimm’s stall for the uphill climb through the Himalayas before we reach a mellow stand of giant redwoods, who seem to be rocking out to some cool Californian songs. The countries blend and mix, as do the sounds; from the specially composed music to cicadas, frogs, wind-gongs and rain-sticks.

Onwards to Africa and dancing fountains and stirring song. This is a bit more “Disney” than the other sections and while it will be a crowd-pleaser, it feels a bit less rooted in the landscape.

Along with the set-pieces there are more meditative sections, such as the lantern lit climb to Nepal where prayer flags wrap a tree. Weave through a crystalline web, and pass a striped world hedge before a flying visit of Europe. And just when it seems like the end, the path turns towards Inverleith House, washed with huge projections of modern plant collectors around the world, neatly bookending the theme of exploration.

While some areas of the experience work better than others, this is a wonderfully immersive experience; the city beyond totally forgotten as you tour the word through a landscape that has been 350 years in the making.
It paints the collection in a new artistic light and allows the intrinsic value of plants to shine through. Worth exploring.