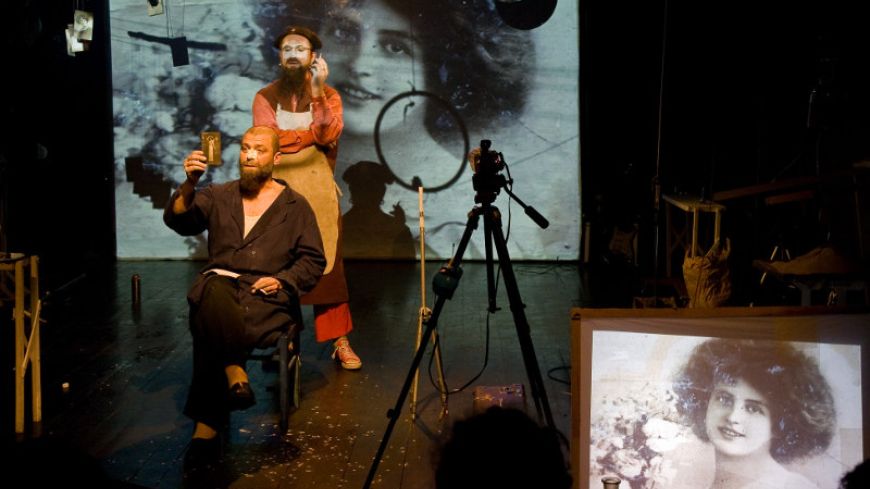 From the outset, trying to impose a narrative – or any other structure that creates a rational order – is a largely pointless exercise. The stage is littered with objects, placed and combined in such a way that their possible use or purpose is impossible to determine, a clutter that cannot easily be defined or described. A fish tank here, glass spheres dangling from lines that run across the ceiling at odd angles from here to there and back again, pipes, a chair, a fishing rod. It’s the laboratory of a mad scientist; it’s a magician’s lair; an artist’s studio, a builder’s junkyard, an old curiosity shop.

The two bearded protagonists rocket through seventeen - mostly wordless - sketches, announcing the concise title of each with an ironic sense of authority. All titles pertain to some aspect of the hero – his emptiness, his motion, his pain, his distance. There are flames, lasers of green light, guns, bubbles and bangs. One man flays the pages of a book while the other saws it in half. Later, these pages will be chewed up and spat out again by an industrial-sized leaf blower that will also gently waft a balloon through a little hoop high up in the air.

There is also a lot of play with perspective. Cameras are used to show the same sequence at the same time from different angles, each inviting very different interpretations of the visual scene. It is startling, unpredictable, bold and audacious and induces laughter, sometimes for no reason that is immediately obvious.

British theatre is so traditionally rooted in the text, that performance art such as this can be a challenge. Throughout this piece, the brain is searching for patterns, its gears crunching and grinding in a futile attempt to order the chaos. The need to make sense of events through words, to thread together a storyline, is strong and needs to be resisted if performances like this are to be enjoyed.

Challenging audiences through showcasing visual-based theatre from across the globe is one of the things the manipulate Festival does best. It also opens up new worlds. Approaching the work of creative artists like AKHE Theatre may not be straightforward for the uninitiated, but it does present an almost unique opportunity to leave your cultural expectations at the door, dive in and go with the flow – just to see where it might lead you.