Film of the Week: The Adjustment Bureau 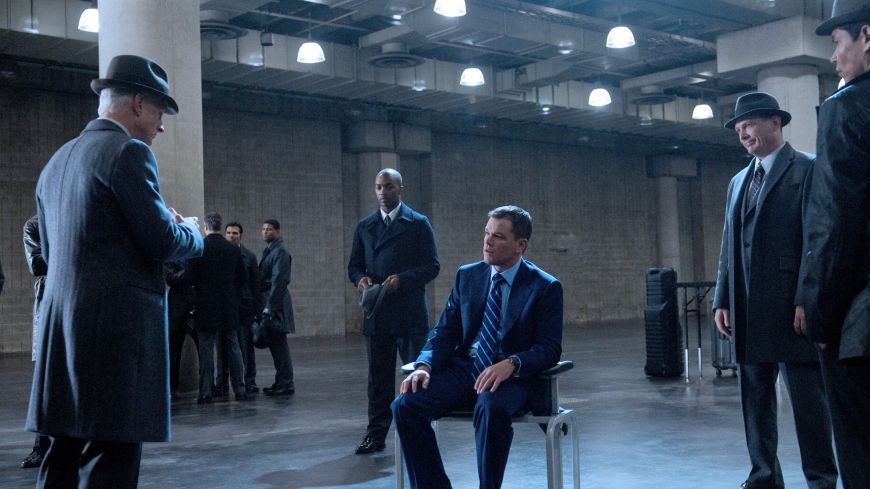 This is a gentler, more subtle, and refreshing take on the kind of ideas that normally breed big pompous action packed epics like Inception and The Matrix. The Adjustment Bureau cleverly dispenses with the need for spectacular visuals and delivers its ideas with intelligence, old fashioned visual tricks and a decent script. This is a delightful romantic thriller with an added sci-fi edge. Personally, I'd have happily just enjoyed it as a romantic thriller as those aspects of the story were already cutting the mustard quite adequately before it turned into an extended episode of Quantum Leap.

It has a decent, solid and likeable performance from Damon as politician David Norris who whilst on the eve of a historic vote about to put him in the Senate, ends up nearly losing his career after a drunken prank hits the tabloids. Enter Blunt as Elise, a resurrecting and grounding force who stumbles into him in a gent’s toilet as Norris rehearses his loser’s speech.

The sparks fly and I have to say, for me, this brief and simple scene was the highlight with the kind of sparkling and witty, on-the-money dialogue that made me believe two people were falling in love before my eyes. It’s done with a knowing grin and in fact the whole film is delivered with a perfectly judged pinch of salt. At last, a romantic drama with genuine chemistry between the leads and a stealing-every-scene-she’s-in performance from Emily Blunt.

But no, we couldn’t just have the film plod along with the enjoyable frisson and cracking banter, we also need doors that lead to other parts of the world and Matrix like agent Smith types running around after you.

And so The Adjustment Bureau’s minions turn up in matching suits and hats to spoil the party after Norris accidentally witnesses their Manchurian Candidate like activities.

What I really liked here was that instead of melting his brain, they just level with him and tell him to keep quiet.  He has too much to lose so reluctantly goes along with it, occasionally arguing with them as if they were pushy parking attendants who’d just given him a ticket. It sounds silly, but it works.

So they try to stop our lovers in their tracks and put them under a New York wide kind of house arrest for not sticking to the Bureau’s version of the script. And here’s the rub. It turns out that most of us and most of history has been written and organised by this mysterious, but not quite all powerful agency, keeping the excesses of humanity in check in order to keep us all here in the long term.

It turns out that really bad things happened when they took a back seat (The Dark Ages, The Holocaust, The nuclear arms race etc). So they’ve stepped back in and meddle with us by gently altering and tweaking our individual destinies by say, making us miss a bus, or spill a drink thus slightly altering our fate. I guess they messed up with 9/11 and Iraq but we’ll let that one slide.

They could be aliens, they could be angels, or just powerful time travelling men from the future, it’s not clear and I quite liked the fact that it was left open. They really are just very busy high level bureaucrats balancing the books, trying to keep the destiny files in order and get themselves in a flap when something doesn’t go according to plan.

Naturally, Damon’s politician doesn’t play ball. He’s not supposed to fall in love, potentially wrecking his future bid for the White House. And Blunt is meant to be a world renowned dancer unhappily married to the wrong guy. But if she falls for Damon, she’ll end up happy but with a lesser career.

There’s definitely some food for thought here and the idea of greater causes outweighing personal desire does add nice moral conundrums to the proceedings. However, proceedings eventually head down a predictable path which I wont describe because, well it’s predictable.  I can say however that the ending is delivered with an unnecessary and patronising voice-over about how we can choose our own fate if we really try.

Overall, the film fortunately strays away from a Matrix pastiche, eventually becoming a cross between It’s a Wonderful Life fused with the production design and zany elements of Terry Gilliam’s Brazil, the latter element making it really quite enjoyable, aided and abetted as I mentioned by great performances and great dialogue but also a terrific score from Thomas Newman.