Film of the Week: Captain America: The First Avenger 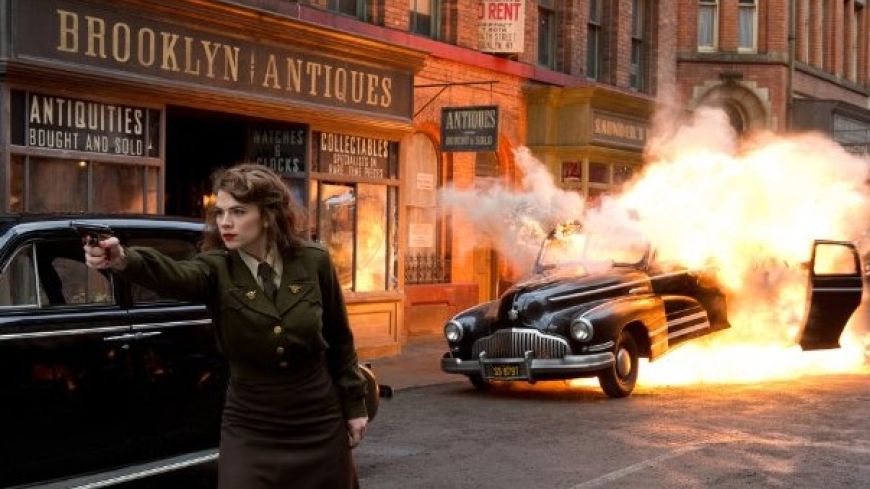 ‘Arrogance isn’t a uniquely American trait….’, sneers Hydra, a renta-pantomime Nazi super-villain during a fiery standoff, ‘but I have to admit you do it rather well’. This is uttered by cinemas latest incarnation of comic book evil played by who else but Hugo Weaving, reworking his iconic Agent Smith from The Matrix (just tweak uniform and add corny accent). He may as well however have been describing the entire film and not just riffing with his arch rival.

Welcome to the world of Captain America, the latest Marvel superhero comic-to-film adaptation filled with so many memorable tongue in cheek one liners from a snappy script that one doesn’t mind characters so decent, so flag waving and so archetypal they could have been hewn in stone from Mount Rushmore.

This is a thoroughly shameless and patriotic big budget revisionist vision of World War Two. New York City isn’t quite Gotham in this parallel comic book universe, but its heading that way alongside all the secret advanced technology and weaponry that both the Nazis and the Americans are in a race to develop first.

It’s a nice irony then that it’s the Americans that can transform an ordinary citizen into a member of a master race, but it’s the Germans who develop the equivalent of the atom bomb and a sophisticated jet to drop it from.

Chris Evans plays Steve Rogers who despite being a fragile weakling is full of all American nobility and pluck, desperate to join the fight against Hitler. Continuously rejected by the army for his frail health, his repeated efforts to enlist come to the attention of Doctor Erskine (Stanley Tucci) who sees something in his trying spirit and enrols him in a top-secret army programme.

After a little bit of boot camp and paternal bonding, Rogers is volunteered in a trial test of a new energy source (that naturally has ancient and occult origins), transforming him into a tall and handsome superdude, buffed up with a nice six pack and a decent tan. Only moments later, in what turns out to be the films first reasonably thrilling scene, he gives chase to a Nazi saboteur through the streets of Brooklyn.

In the first display of his compassionate nature (which helps when you’re massacring the enemy) he’s torn between pursuing the villain and a child thrown into the sea. In a nice variation on the Superman format, the kid yells at him ‘I can swim – go get him!’ and the action only briefly interrupted continues. It’s these witty twists on convention that makes it all the more enjoyable.

I wont go into much more plot detail but suffice to say he gets to Europe and kicks Nazi ass with the help of a motley crew of war prisoners who seem to be leftovers from Quentin Tarantino’s Inglorious Basterd’s.

It’s a great cast that’s been assembled with notable support from Toby Jones as the supervillains sidekick, uncomfortable in his position by his evil master’s side. And as usual, Tommy Lee Jones is enjoyably typecast as a military Colonel, acting everyone else off the screen and delivering all of the film’s best lines in his typically gruff no nonsense trademark style.

Captain America is a cut above many of its comic book rivals. Although its essentially big budget painting by the numbers, it's also very well crafted with lots of imaginative touches. Joe Johnston’s direction, whose other comic book film The Rocketeer was vastly underrated, directs with great competence. The production design and effects, which often reminded me of the Indiana Jones films, are mostly spot on and it’s niftily edited alongside a good score.

But the chief highlights apart from an enjoyable script and decent action were a few key standout scenes. There’s a thrilling almost Busby Berkley-esque dance routine montage showing the genesis of Captain America, not as an action superhero but as a humiliated incarnation of an imaginary one.

Throughout all the battles and action choreography are very well done, particularly a tense shooutout on a train. There’s also towards the end a denouement that unexpectedly seemed to pay tribute to Powell and Pressburger’s classic A Matter of Life and Death. This gave me slight tingle when I realised what the scene was paying homage to.

I did feel that the final ending of the film was let down by a closing line that should have been imbued with heart wrenching tragedy but instead was delivered as a corny quip. This left me distinctly puzzled although it's slightly made up for a by an excellent closing title sequence based on famous propaganda posters and images from the war. So a few quibbles aside, it’s all very well done and very entertaining.

One final note, this film as far as I'm aware was not made in 3D, it was added on in post production and my personal recommendation would be to see it in 2D.