Film of the Week: Attack the Block 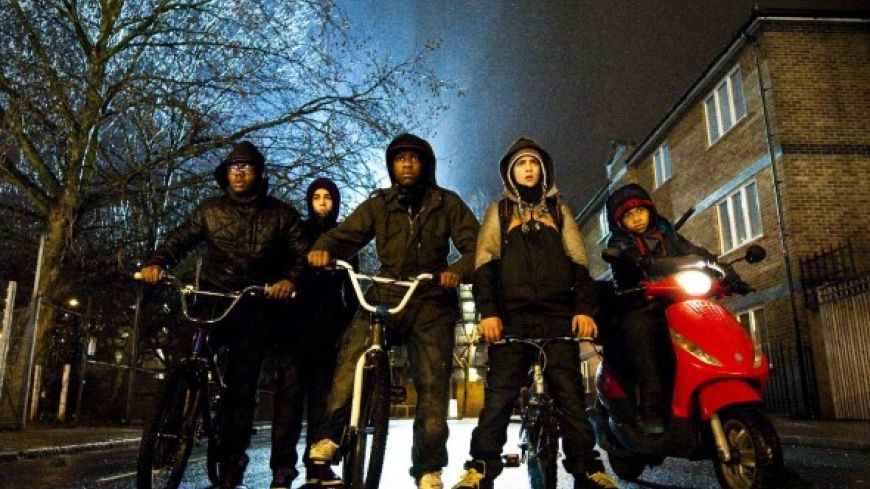 At first glance it seems that with one deft stroke, Joe Cornish and his team may have just wiped out a much beloved and sacred cinematic genre by sticking two fingers up to it with this hilarious and thoroughly irreverent rollercoaster ride. Yet the pleasure in Attack the Block comes from the knowing and successful blending of established sci-fi horror/action flick conventions with a witty, gritty, and socially aware parody on the lives of typical ASBO kids.

On bonfire night, on an average South London council estate, a scary Geiger-esque alien crash-lands into a car next to a gang of young hoodies. Do they run for their lives in terror? Do they get picked off one by one in an editor’s dream frenzy of blood, shadows and shrieks?

No, the kids toss fireworks at it and then kick the living shit out of it. It’s utterly hilarious and is only the first of many disrespectful twists on the genre.

Cornish, formerly one half of cult duo ‘Adam and Jo’ with irregular piss taking guest slots on various TV shows has crossed over to directing with some ease it seems, extracting remarkable performances from his young cast of virtual unknowns.

But it would be half the film without its sparkling, slang-filled, honest, down-to-earth and foul-mouthed screenplay that had me clutching my ribs on several occasions. When one of the gang mentions the expected arrival of police, ambulances and news helicopters he adds: ‘...and all that twenty minutes later shit’.

Half the film’s jokes are verbal and half visual, but it’s the former that wins the quality prize. I suspect too that Attack the Block is the vehicle that propels its principal protagonist played by the brooding yet sympathetic gang leader Moses (John Boyega) into the limelight. With a face not a million miles from a young Denzel Washington, my money’s on his star rising very quickly.

The premise is straightforward. A swarm of ravenous aliens or as the locals refer to them ‘big gorilla wolf mother******s’ crash land near a 60’s tower block and begin tearing the place up. Dark shadowy blurs with luminous teeth, they’re not to be messed with unless you’re part of an armed gang. Even then, survival isn’t assured.

Although unceremoniously dispatching the first arrival was a relative breeze, the new visitors are more ferocious. With the entire story contained in and around the tower block, a typical and claustrophobic game of cat and mouse develops as the gang take refuge in assorted flats trying to find weapons and ways to take them on. Despite their low budget visual simplicity, the extra terrestrial guests are pretty scary and there’s a good few jump-out-of-your-seat moments. This is a film to see with a big expectant crowd to share in the laughter and the shrieks.

Half the story is driven not just by the ferocious doglike aliens but by the gang’s forced teaming up and interactions with the middle class white neighbour they mugged earlier, a psychotic power hungry drug dealer and a slightly upper class geeky trustafarian intellectual who struggles to click with them in a notably good and comic performance from Luke Treadaway.

There’s also a small supporting role from the reliably bumbling and amiable Nick Frost. Inevitably his presence here will draw comparisons with the other genre parody he starred in when he and his partner in crime Simon Pegg catapulted themselves to stardom in Shaun of the Dead.

The advance hype has been nothing short of sensational. Preview audiences were reportedly rolling in the aisles and cheering. It’s low budget (well £8 million's low-ish for what's delivered) and by necessity its moments of witty invention have been trumpeted as its chief virtue alongside its uniquely British and localised idiosyncrasies. These qualities are expected to give it a generous leg up at the box office, if not a cult following.

So what’s the verdict? All of the above except the bit about a cult following. It may be (relatively) low budget and quirky but it's clearly been manufactured with confidence to be a commercial hit. I have no doubt that word of mouth will quickly turn it into a runaway hit, which it fully deserves.