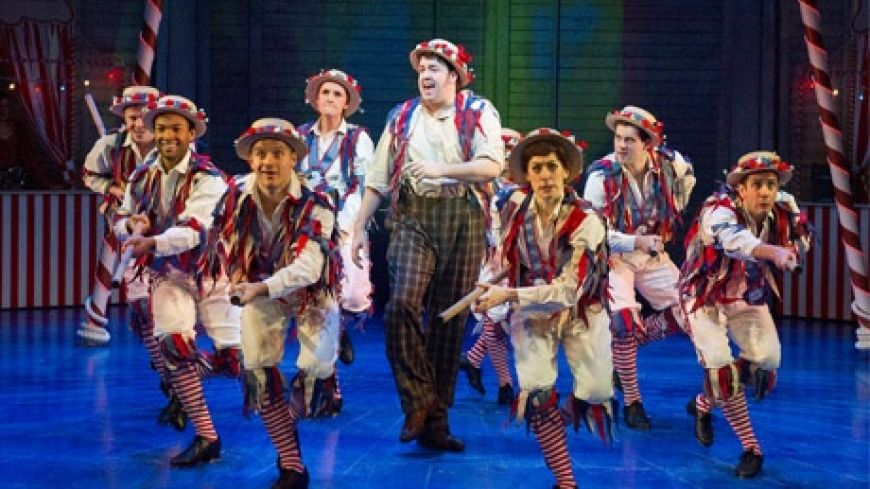 Gently-men of Edinburgh, prepare your sweet tooth and hide your children as Caractacus Potts and his family return for another high flying, far-a-floating adventure to Vulgaria with everyone's favourite magical car. In tow with all her usual mechanical wonders, Chitty Chitty Bang Bang brings a quartet of big names and an even bigger stage design on this year's road trip.

Adapted from the 1968 motion picture, Ian Fleming’s infamous children’s story is refuelled and propelled onto the stage, pumped full of nostalgia and all your best-loved sing-a-long songs. The doleful, yet never despondent, inventor Caractacus Potts (Jason Manford) saves a dishevelled Chitty from the fate of the junkman, restoring her to her former glory. During a picnic at the beach with his two children and new friend Truly Scrumptious (Charlotte Wakefield), the Potts find themselves up to their carburettors in trouble when Lord Baron Bomburst (Phil Jupitus) of Vulgaria decides he must have the European Grand Prix winner for his birthday.

Comprising an all star cast, including comedians Jason Manford and Phil Jupitus as the male leads, and west end star Charlotte Wakefield and Brookside's very own Claire Sweeney as their respective female interests, expectations potentially soar above the obtainable.

Jason Manford’s Caractacus, although warm of heart and strong of lung, avoids the eccentricity of previously seen inventors, offering a more reserved and uncertain Potts whose occasional choreographic bumbling is forgiven as a lovelorn nervousness.

Complimenting Manford's pitch perfect, paternal parent of two is Wakefield's sincerely sturdy Truly Scrumptious. Her rendition of "Lovely Lonely Man" is the only number in the show able to rival the beautifully fervent performance of "Hushabye Mountain", it's just unfortunate this passion and intensity isn't visible when the pair are in close proximity.

Despite the order of billing, the show's limelight is overwhelmingly pilfered by Jos Vantyler's malevolent Childcatcher, performing a less snivelly but equally intimidating interpretation of Robert Helpmann's original villian. Preceeded onto the stage by his own silhouette, Vantyler's scourge of childhood happiness induces boot quaking from adults and children alike, making his fellow villains seem mildly mediocre by comparison.

With heavy reliance on Simon Wainwright's boundary pushing video design, enabling Chitty Chitty Bang Bang to really hit the open road, it can't help but feel as if some of the theatrical magic is lost. Admittedly the production gains an air of spectacle, however this allows the imagination to take a back seat and let the windmill sized television do all the work for you.