Film of the Week: One Day 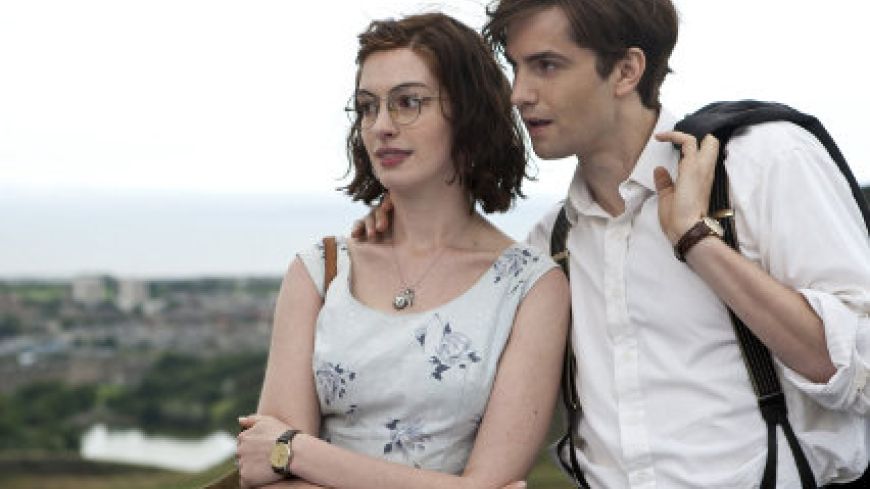 Given the amount of media time that has been spent talking about the boost to Edinburgh tourism from romcom One Day you'd think it was set in the city. While Edinburgh bookends the action, for the most part the affair plays out over the years in London, as well as Paris and France. There's really not that much of Edinburgh in it.

Location usually is an important definer of mood in a film. What little there is of Edinburgh here, is the prettier, postcard image of the New Town and Old Town. No junkies, jakeys, pervs, or washed-up magicians here, like some other Edinburgh-shot films that might come to mind.

In fact, the streets are empty, a bit of a ghost town, as the film opens in the wee, wee hours of the morning, with an establishing shot of the Edinburgh skyline looking across from Calton Hill (a classic vantage point if ever there was one).

Then, looking down Victoria Street, we follow a group of begowned university graduates as they stumble noisily up the road, stop to carouse in Parliament Square alongside St Giles Cathedral on the Royal Mile, and dally for a snog in the city chambers quad, where Anne Hathaway's character Emma is noticed for the first time by the leading man, the suave Dexter (Jim Sturgess).

From here, it's straight to Em's run-down digs for a spot of casual, student sex. Although the sex doesn't materialise. Instead, after some initial nervous, misunderstood banter, the two cuddle in bed. And so begins a life-long friendship.

The day is 15th July, and for the rest of the film we follow the couple as their unrequited love waxes and wanes through each anniversary of that initial meeting (flashy little subtitles informing us of a new year).

The two make unlikely soul mates – Dexter, the upper-crust, superficial smoothie; Em, the sensible, middle-class, introspective one. Thanks to the relatively schmaltz-lite nature of the relationship punctuated by some witty exchanges, it's enjoyable enough to watch them metaphorically dance around each other.

However, it's a struggle to fathom why Em remains loyal to Dex over the years, particularly when his career as a late-night pop TV presenter goes off the rails and he's hitting the drugs, booze, and girls in a big way. The episodic depiction of the relationship doesn't really help explain the situation.

Another admirer of Em also completes a love triangle – the geeky, but nice Ian (comedian Rafe Spall) who works at the same London Tex-Mex restaurant – who seems an even more unlikely candidate for Em's affections.

Maybe Ms. Hathaway is miscast? She seems too vivacious and glamourous to play someone passed over for so long. Critics have honed in on her accent. Her dazzling white smile seems less authentically Yorkshire.

As romance goes, One Day is fairly worldly and melancholy in tone. During Dex's downward descent, the film shows the repercussions with not just Em but also his sick mum (Patricia Clarkson). There's also a touching scene between Dex and his dad (former Inspector Rebus Ken Stott) later in the film, mainly because for the the rest of the film dad spends his time being a grumpy curmudgeon.

The film has its moments. However, the story doesn't hold together in such a way that there is a big emotional pay-off that it seeks by the time it returns to Edinburgh's Arthur's Seat at the end.