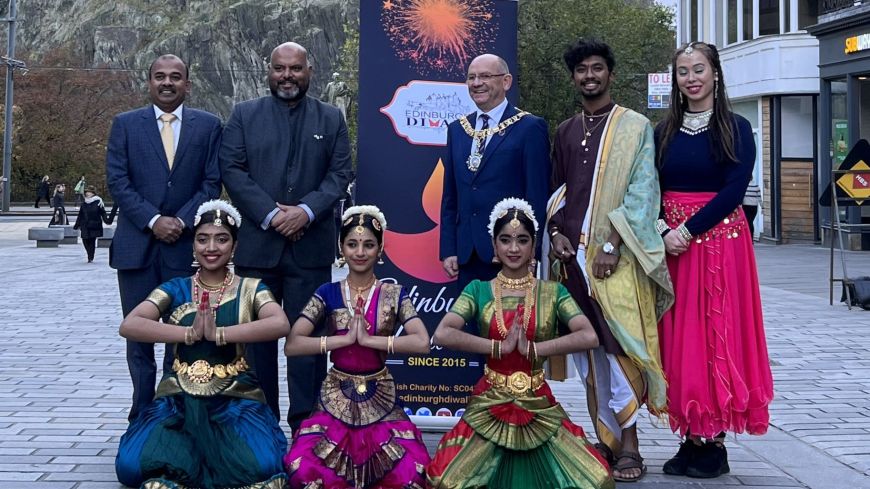 The annual Diwali festival brings its familiar mix of Scottish and Indian culture to Edinburgh's New Town this Sunday (6th November). The inaugural Edinburgh Diwali was in 2015. This year's "festival of lights" takes place a day after Bonfire Night.

Like last year, Edinburgh Diwali starts with a parade from St Andrew Square at 1.30pm, moves along George Street to Castle Street led by the Scottish Regiment Band together with the Stockbridge Pipe Band, Glencorse Pipe Band and the Edinburgh Noise Society.

The bands will be accompanied by seven groups of dancers, representing dance forms from different parts of India, performed by different community groups and students from around Edinburgh.

The Parade will be led by the Lord Provost of Edinburgh, the Consul General of India and the Edinburgh Diwali Committee.

Celebrations continue at the Ross Band Stand in Princes Street Gardens from 3.30pm with a free programme of eclectic mix of dance, drama and music.

A scene from the epic Ramayana, depicting the story behind Diwali, will be performed by students and actors from Edinburgh and Bharatiya Ashram Dundee. A highlight of the event will be a performance by the Indian singer Kaushik Shukla, accompanied by local instrumentalists.

The evening will culminate with a firework display at 6.30pm.

“Diwali, the Festival of Lights celebrates the victory of good over evil," said Consul General of India Edinburgh, Mr Bijay Selvaraj, "It’s a time to celebrate, get together with family and friends and take the larger message of peace and hope to all around us."

Rajnish Singh, President of Edinburgh Diwali encouraged people to join the free festival: “With a rich mix of South Asian and Scottish culture, music and performances, it’s a wonderful opportunity for all of Edinburgh’s residents to immerse themselves in this colourful, inclusive and interactive celebration with family and friends."

“It’s one of the most spectacular events on Edinburgh’s calendar and is truly inclusive, providing free family fun and celebrating the city’s many multi-cultural communities," said Lord Provost Robert Aldridge.

“Edinburgh Diwali continues to go from strength-to-strength, as part of a worldwide celebration involving around 1.5 billion people, together warding off the darkness, and welcoming the light into our lives. My thanks to the President and the Committee for working so hard to plan such a great programme and it will be my pleasure to help lead the parade.”