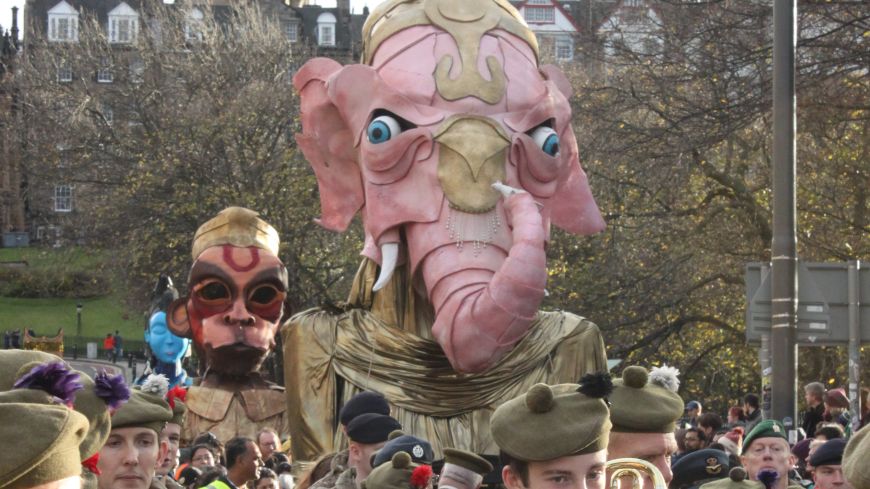 Philippine folk dancing, African drumming, belly dancing, Cuban salsa dancing and a Chinese lantern display are coming to Edinburgh’s Castle Street next week as part of what is being described as the most "culturally diverse" Edinburgh Diwali celebrations in its five year history.

Edinburgh Diwali will also be back with the centrepiece city centre parade, performances, and fireworks display on Saturday 26th October. Thanks to a new partnership with Lightopia this year, Diwali a Chinese lantern display will animate Castle Street from Wednesday 23 to Saturday 26th October when the Diwali Parade takes place.

With a large Diwali god, angel wings and a dynamic dance floor, Castle Street springs to life each evening from Wednesday 23 to Friday 25 October from 5pm to 7pm with music and performances including Philippine Folk Dancing, African Drumming, Belly Dancing and Cuban Salsa Dancing – all free to enjoy.   Food stalls are open daily from noon to 10pm.

A new “Happy Diwali” sign will light up the city from Castle Rock as well this year.

“Diwali is the celebration of light over darkness, good over evil, and so many cultures around the world mark this as we go into the dark nights of winter," said Mohindra Dhall, who has headed a dedicated team of Edinburgh Diwali volunteers for the last five years.

"With such a wide programme of performances and entertainment from many cultures, this year Edinburgh Diwali is making a huge effort to bring communities together. This is truly an event for everyone – so come and celebrate with us.”

The Edinburgh Diwali Parade on Saturday 26th will be the usual lively and colourful procession of dancers, with Hindu Gods joined by military pipe bands and this year for the first time Chinese Dragons and Chinese Lions.

The Lord Provost Frank Ross will lead the procession from City Chambers on the High Street at 2.30pm on Saturday 26 October.

Dancers from the Edinburgh Bhangra Crew, Bhartiya Ashram and Edinburgh Dandiya will be joined by Cuban Salsa Dancers and pipe bands from The Scottish Regiment, Glencorse and Stockbridge as well as representatives from the Riding of the Marches.

Three floats of the Hindu Gods Ganesha, Hanuman and Shiva will be followed by the horse-drawn chariot of Lord Rama proceeding to his coronation.

The Parade culminates with music and performances on Castle Street, before the celebrations move to the Ross Bandstand in Princes Street Gardens for more theatre, music and dance.

The event climaxes with a firework display at 7.30pm.

All the Diwali events are free and open to all.

Lord Provost Frank Ross, patron of Edinburgh Diwali, said “Yet again, Diwali will light up the city with a dazzling parade and festival of lights, dance and music. It’s one of the most spectacular events on Edinburgh’s calendar and is truly inclusive, providing free family fun and celebrating the city’s many multi-cultural communities. Don’t miss our most diverse programme yet!”

With the support of the National Lottery People’s Project, Edinburgh Diwali works with primary school children across Edinburgh producing Diwali workshops and activities for over 800 pupils in 27 schools giving children.

Edinburgh Diwali is supported by The City of Edinburgh Council, The National Lottery People’s Project, Virgin Money, Standard Life Aberdeen, and The University of Edinburgh.