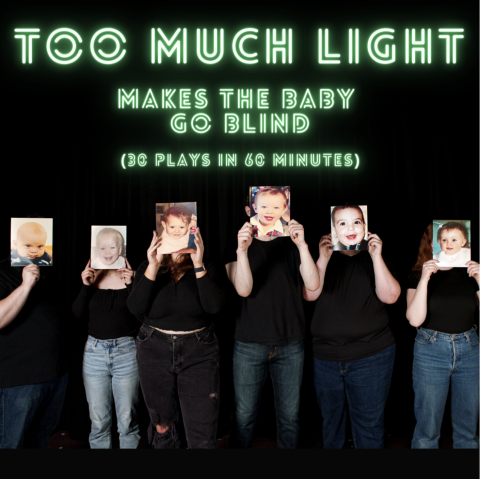 Thirty plays in sixty minutes. That is the premise of the once-longest running show in Chicago, originally performed by company The Neofuturists. The play came to a close for The Neofuturists in 2016 when its creator, Greg Allen, revoked the group’s licence to perform Too Much Light Makes The Baby Go Blind (or TML, for short) so that other companies could produce the show. If iterations like this are why The Neofuturists across Chicago, New York and San Francisco now have to call their ‘weekly inventive performance’ The Infinite Wrench, then it’s unclear what the massive revocation (and subsequent rebrand) was for.

In this Fringe show, the Los Angeles Theatre Initiative has offered the basic structure of TML: a 60-minute timer ticking down, inane name tags thrust upon the audience at their arrival, numbers 1 through 30 strung up behind the players and calling “CURTAIN!” to prompt the crowd to choose the next play. Curiously, the group has omitted the signature ‘menu’ from this production, which is the numbered list of the 30 play titles, given to the audience members to use when deciding the order of the plays. This general structure is where much of the similarity to its namesake ends.

The original TML is a tradition of dynamism, courage and honesty. Performed with autobiography and experimentalism at its heart, it is meant to evoke curiosity, brave failure, thrill in its zaniness and explore our collective vulnerability. Yes, many of the plays can be funny, but, unlike this production suggests, TML is not, and shouldn't be performed as, essentially cheesy sketch comedy.

A few plays sat above the rest in terms of content and TML ethos (their titles assumed to be Thank You For Coming, Cyrano and Come Here), but in general, the rest of the plays either don’t work under this title or are performed so cloyingly you start to join the timer in the countdown.

Failing to produce the essence of the work under which it is billed, when it comes to this production of Too Much Light, it is not a Caravaggio but instead a poor paint-by-numbers.