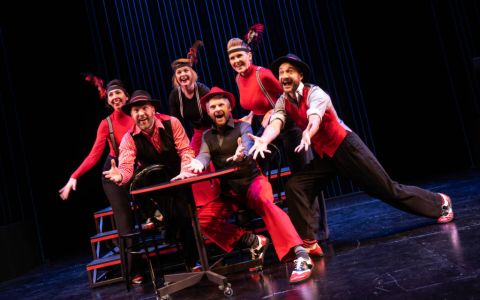 Cameron Mackintosh is on the phone. He needs a new musical and we, the audience, are just the experts to give him one. With the amazing Fringe favourite Showstopper! The Improvised Musical, the audience design the show, calling out suggestions for the setting, influences and even the title.

Lights Out is tonight’s freshly improvised smash-hit, set on a lighthouse in Ireland and to the musical influences of Stephen Sondheim, Hadestown, War of the Worlds and generic pop music. This troupe is consistently jaw-dropping, to the point where some people just cannot believe the entire piece is made up by the actors and band on stage, on the spot and in the moment. Ballads, sea shanties, comedy, intrigue, and rousing hits like “Oncoming Storm”, “Live Laugh Love” and “A Million to One” leave the audience gobsmacked and cheering.

The ability to create songs, harmonies and score on the spot is an unbelievable skill in and of itself, but, equally, this troupe awes by inventing a sound plot as they go. This story explored the lighthouse keeper’s life, his partner Margie, brother Seamus, (talking) dog Jack, Margie’s ma and a mysterious Airbnb guest with a hidden motive. A treacherous storm blew through the village on the night he met Margie, forsaking the light atop the tower in light of his first date with her. That neglect resulted in a shipwreck that took the lives of Raymond Briggs’ family, and now he’s rented the lighthouse suite and returned to take his revenge. There’s been a darkness in the lighthouse keeper’s heart ever since that fateful night, and has Margie turned away from him in his despair. Come hell or high water, the lighthouse keeper must now choose to save the relationship and embrace light in his own life, not just the light he vigilantly now watches for the seafarers looking for a beacon home.

This is not a spoiler, of course, because there is a new show every night. Never disappointing, always exciting, this is a Fringe must.