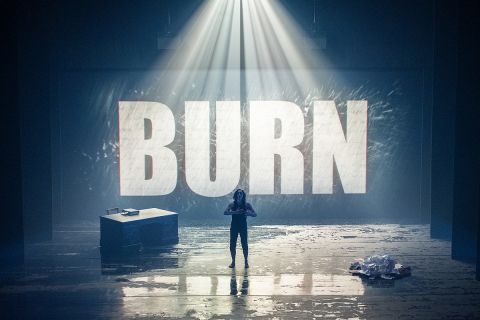 “Burns the man and Burns the poetic genius went wonderfully together. There is more of the real Burns in many of his poems than can be learned from any known account of his life” – Rev Stopford Wentworth Brooke.

There are rattling showers and bellowing thunder, but if the Devil has anything at hand it’s only to raise the spirit of Robert Burns.

The bard steps into the spotlight’s gleam to share his story in his own words, taken from his letters and poems.

"Here am I. You have doubtless heard my story, heard it with all its exaggerations. But I shall just beg a leisure moment of you until I tell my own story my own way."

An early life is characterised by poverty as his family move from small holding to farm without improving circumstances.  Farming is “a ruinous affair”.

Affairs are also associated with him, as he woos, pleads and confides with the overlapping loves in his life.  The years tick on.  On April 14th 1786 a proposal to publish his poems is advertised in the hope of attracting subscribers and on the same day Jean Armour's father tears up the paper in which Burns attested his marriage to her.

To be a poet is still his highest ambition but his “constitutional hypochondriac taint” sees him swing from melancholy to grandiose.  His hypomania is charted in his work, contrasting with his fortunes. Still, his poetic temperament is a worthwhile trade for the demons.

The dark and light are captured in the impressive projections (from landscape to sketched farms, documents, and animations, including grey mare, Meg) and in the “uncategorisable” music. Both lend Burns a rock star element that his life suggests.

There is added wizardry in illusions which manifest a self-writing quill, paper spewing desk and sinking chairs.

Without a little knowledge of the man and his works it might not get entirely under his skin, but we are left with Burns own “flattering faith that my poetry will considerably out-live my poverty” and of course his motto “I dare!”.

Surely if the bard were to see the show it would lift his spirits.