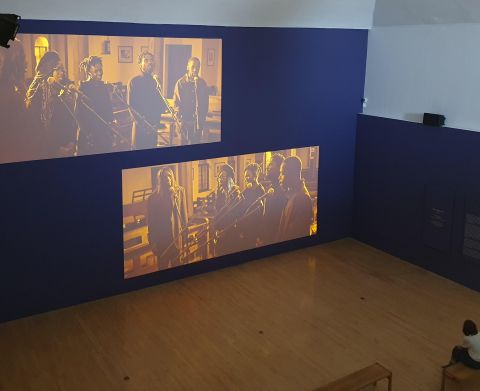 With so many of society’s landmarks removed or redefined, our notion of ‘normal’ has now become fluid – this ongoing ambiguity underpins the exhibition. Just as the pandemic has elicited emotions both of devastation, and also exhilaration, here the dialogue between those divergent experiences is partially captured, as painfully lived. It looks not so much at the pandemic’s familiar and presenting issues, but the inequalities and abuses it thereby exposed – environmental, ethical, economic.

On entering the cavernous White Gallery, we were instantly struck with ‘This song is for…’ by Gabrielle Goliath. The undercurrent of sexual and domestic abuse was explored here. Each day, one of five well-known songs, each chosen by a rape-survivor, is played on a loop; but a flaw is introduced, whereby the piece gets stuck on a line which is continuously replayed. The result is an arresting and affecting experience of the cycle of traumatic recall, and which hauntingly sticks.

The next piece, ‘The Delusion of the Commons’ explores one of the show’s core and central themes:  our encroachment on nature, and thereby the alien micro-worlds of viruses. Recalling man’s ill-fated lust to dominate the earth, this sculpture portrays the Tower of Babel, but with a deep-sea vent –home both to the vast mineral deposits hungered after by mining companies, but also the micro-organisms crucial for testing for Covid.

Further on, McCullan’s ‘The lure of tomorrow’s harvests’ showcases the surprise volume of honey collected from Edinburgh and the Lothians during 2020. The lockdowns drastically reduced pollution, and correspondingly allowed wildlife to flourish. Examples of the honey were both mounted as images, but also contained in a beehive cabinet sculpture.

Unusually in recent months, this exhibit also had a surprise but welcome interactive element, whereby the visitor could take out the frames of the honey collected.

Conversely, ‘Growth Assembly’ presented a disturbing futuristic depiction, ironically in 7 quaint watercolours, but of macabre hybrids of plants and machines. The delicate but dangerous interplay between the natural and manmade world was also the theme of several other exhibits.

The final work of 21 to see, BLKNWS is a two-channel newscast on networked media players, and seeks to open up a debate about the true breadth of Black culture. It concludes, like the first, in posing questions about the sexual, cultural and racial inequalities that the pandemic has helped to unmask.

Combined with the show’s other dominant ‘ecological’ thread, ‘The Normal’ paints a suggestion of humanity’s now pressing priorities, the impact of its actions, and how Covid has brought them into much sharper focus.

runs daily throughout August: 10am – 5pm