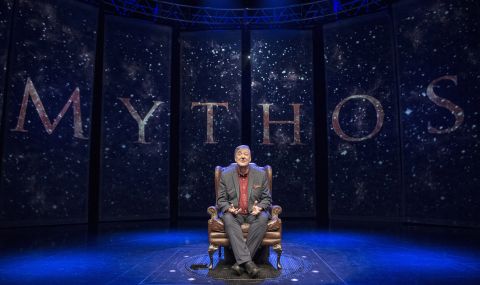 National treasure, Stephen Fry brings his best-selling novel, ‘Mythos: The Greek Myths Retold’, to life. The tantalisingly dramatic mythology of the Greeks is full of gore, sex and life lessons. Fry has taken on the mammoth task of performing three different plays centred on different aspects of the mythology: the Gods, the heroes and the mortals. Today was an in-depth looks at the powerful yet flawed Gods and how the world began, ‘not with a bang but with chaos.’

It is clear from the offset Fry could talk for days on this subject. Walking on stage to rapturous applause he remains humble and even blushes as the crowd sings him ‘Happy Birthday.’ Sitting atop his imposing leather armchair, Fry clearly speaks with the flow of a well-experienced storyteller with no ridged script to stick to. Beautiful images of renaissance art, European landscapes and the solar system projects onto the backdrop behind him. Some moments are truly mesmerising, reminiscent of a planetarium. Fry captivates the audience with his relaxed, soothing tone. He admits he can easily be distracted, wanting to tell us as much as possible about his impassioned subject. Fry makes us laugh with modern references to emo culture and even ‘Love Island,’ but the focus is firmly on education over comedy. Moments of theatricality are few and far between but very effective when used, like the revealing of a vase behind his seat.

There are moments of audience participation. Fry urges us to use social media to ask him (or the Oracle) questions during the break. We are also required, on two occasions to play ‘Mythical Pursuit’ and pick a category at random. This was lacking as it was only the illusion of control, but through this game we uncover some fascinating insight into Fry’s theories. That Prometheus’ controversial creation of man can be compared with our creation of AI, and Pandora’s ‘Vase’ is our internet. That we are repeating the legends that came before us to one day become legends ourselves. This section was riveting and there could have been more examples of bringing these myths into the modern age.

Fry was his charming, enigmatic self and with the help of projections created a beautiful story-telling experience.