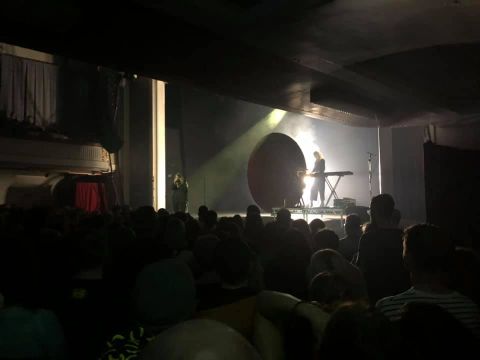 In short, Kate Tempest was amazing. More accurately, the combination of her and a crowd that revelled in the music, spoken word and poetry, were amazing.

On entering a sparsely populated stage with a central back-lit black disk, Tempest (Clare Uchima on samples/keyboards) performed an incredible set that had a capacity crowd enthralled.

This is weirdly not music to dance to. The perfectly formed soundscapes are backdrops to Tempest's poetry, rap, spoken word, that you are listening to.

It’s words. Words that resonate, whether it’s the resonant ‘Europe is Lost’, the beautiful ‘Firestorm’, or the universally applicable ‘Hold your own’, which I doubt anyone can’t find some resonance in.

No one I think is quite sure what this is all called, but is that important, who cares?  Whatever it was, it was unanimously loved.

I’ve read there’s a recent spat in poet-land regarding Tempest, among others (likely more for the written word).  They say that honesty and accessibility denigrate the art form.

Accessibility in their terms is the lowest common denominator, but what I saw was a coming together, a thousand people leaving with an empathy they didn’t necessarily arrive with.

“There is so much peace to be found in other people faces.”