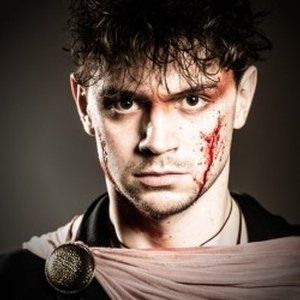 As the all-seeing gods watch over the epic struggle between the Greeks and the Trojans, three mortals will make the choices which will lead them to their inevitable destinies.

Wrath of Achilles looks at the Trojan war through the prism of the relationship between Achilles, Patroclus and Briseis. Achilles – the handsome, broad-shouldered hero, confident, relaxed and comfortable in his own skin, Patroclus – his lifelong companion, scrawny, hunched and anxious, Briseis – the beautiful enslaved queen, the coveted and divisive trophy of war, defiant, powerless, yet pivotal.

These three central roles have been very well cast and the performances are powerful and convincing throughout, as the characters battle with each other and with their own conflicting emotions. The writing has broken free from any pseudo-Shakespearean shackles and escaped any trace of ponderous Victorian translation; this is an Achilles who says “Okay” and “You’re kidding!”, but the simple staging remains firmly historical and the inventive costume design adds greatly to the atmosphere.

“Men – you’re all the same!” hisses Briseis. Not the most original line, but a telling comment in the context of this story. In Achilles, the anger that explodes into violence lies dormant just below the smooth, polished surface. In meek, mild-mannered Patroclus, the rage is buried deeper, but it is still there and can never be wished away.

In Homer, the usual role of the gods is to squabble and to take sides. Here, they are a grim-faced chorus, singing mournful songs to each other in a secret language.

We are left with the sombre thought that even heroes can do no more than live out their predetermined fate, whatever choices they make. Perhaps that is why all the beautiful gods look so glum.