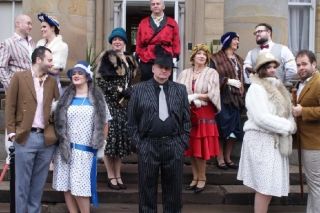 The time machine comes in the form of a gramophone, a device that our host uses whenever he is feeling a little blue. His favourite Broadway show, “The Drowsy Chaperone" provides the needed escapism with “a story, and a few good songs” that will take him away.

He knows it isn’t the perfect show, but he loves it because it is flimsy: two-dimensional characters, a well-worn plot, laboured motifs, lame scenes and all. Dropping the needle to the record, he imagines the opening, and the show takes life around him.

It’s a show he loves so much he can’t resist sharing trivia and commentating on the action, even as he is pulled into it. “Hang on for the ride,” he advises, as the musical-within-a-comedy spins its twisted plot of mistaken identity, fantasy and song. The threadbare plot sees a starlet giving up the stage for love, and everyone from an agitated producer, a ditzy show girl, a Latin lothario and her less than supportive and somewhat inebriated chaperone getting in the way of the wedding.

Winner of five Tony Awards, including Best Book and Best Original Score, it’s a musical parody that dryly pokes fun at all the tropes and stereotypes of the genre while looking back fondly to see how far we have and haven’t come.

The production is in the safe hands of The Twilighters, who had a successful run of their own in 2017.  There are strong performances throughout and both vocals and orchestra are pitch perfect.  The choreography does well to deal with the thrust stage, only in the finale is there any issue with blocking.

The lack of scenery is perhaps understandable within the confines of the Fringe, although it does remove a few sight gags. Some editing of the script is also sensible, but the cuts go a bit too far, particularly as it runs under time. There are a few easy jokes left there for the taking and on the basis of the past performance the cast are capable of doing more.

As our host, The Man in the Chair, says “I just want to be entertained” and “that’s what this show is – fun”.