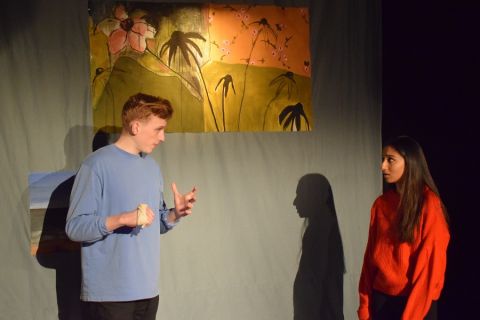 Oxford-based, student-run Mercury Theatre in their most recent venture have decided to tackle male mental health with Numbers. All starts well, with the first scene focusing on Jack as he lists his achievements of which he is most proud. He speaks to empty chairs set up like a support group. This is the one and only time numbers are truly referenced in the play, as Jack counts how many beers he can down and how many bites it takes for him to swallow a Big Mac. Waddon does manage to capture the realism of Jack, and his acting is sublime despite the long, rambling monologues. Even the set (black material labelled ‘Mirror’, ‘urinal’) was bare, yet unique and interesting.

However, now it was all to go downhill. Numbers is an incredibly privileged view of mental health. It reeked of self-pity, and managed to do a lot more damage than good. The character Michael stood in stark contrast to Jack, a young man rejected by his family for his sexuality who then turns to alcohol to escape his tortuous existence. Instead of Jack helping this character, he judges and belittles him, ruining his only safe space of the support group. Jack, and the show as a whole, remain completely oblivious to their mistakes.

The writer and director,Alex Blanc seems to come from a place of ignorance. No comment is made on the long NHS waiting lists, the difficulty to reach help or the need for male support. Everything is made easy for Jack, including his incredibly understanding girlfriend, Brianna. Any sense of theatrically was dropped to make room for long, tedious, repetitive whining. Opportunities for plot development came and went; the audience kept waiting for a reveal but no moment of clarity came from between sobs.

Some boys will be able to see themselves in Jack; however, many people who suffer from mental health issues will be enraged. This production is little more than an attempt to be ‘in fashion,’ and shows no deeper understanding of the important issue.