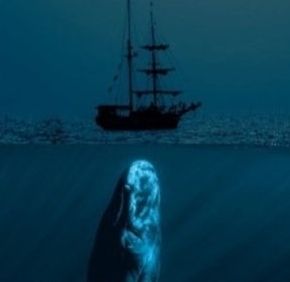 Enter the frenetic, hunt for the great white whale.  Captain Ahab is set for vengeance, promising to chase the creature over all the sides of the Earth and round perdition’s flames before he gives up. On this first day of the chase Moby Dick ascends from the deep to wreck his boat, leaving the crew to be rescued.  It may not be an auspicious start.

The tale is told by Ishmael, a sailor who feels the need to take to the sea whenever it is a damp, drizzly November in his soul.  He has an everlasting itch for things remote and the idea of the mysterious great whale is also an inducement. The feelings he has towards the oceans are something he thinks are cherished by everyone to some degree.

He tells of the ship, the “Pequod”, a cannibal of a craft, clad in the chased bones of her enemies and, like all noble things, touched with melancholy. There are character studies of shipmates, such as Queequeg, a frighteningly tattooed islander and purveyor of shrunken heads.

Caught up in Ahab’s wild power the mad pursuit continues, playing against the fates, pushing beyond possibilities and becoming the stuff of legend.

The tale is intensely told, Ericson casting shadows on the sailcloth background as he captures the characters and describes the epic battles.  By literally cutting to The Chase (Chapter 133), it manages Ishmael’s lengthy and speculative digressions on the nature of the animals themselves. It remains a monstrously wordy text however, and there are occasions where he seems fleetingly caught on the crest of a wave searching for the next line.

The play is a tribute to the bicentennial of Herman Melville's birth. Perhaps also to the fact that he may have done for the whale what “Jaws” did for the shark. The play focusses on obsession and the need to captain our own ship. There is conceivably more to be drawn from the book described by Melville as “blasphemous”.

A good traditional telling of a whale of a tale.