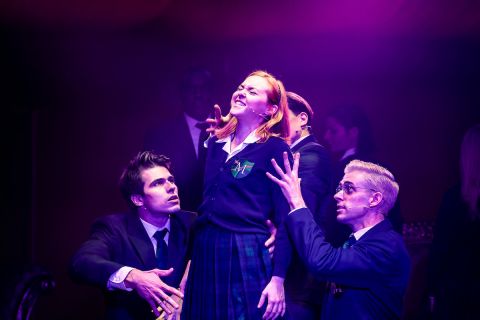 A deliciously dark romp through the tortured actions of stepsiblings Sebastian and Kathryn, this musical brings unexpectedly hilarious moments within its biting teenage satire. The songs are used particularly well, with the unusual timing and application of familiar songs into the fabric of the storyline, one of the highlights and a strength of this production.

Focussing on the trials and tribulations of sex, romance and the single-minded need for revenge, this musical revamp of the original movie strikes a chord with the audience who recognise the fledgeling attempts of a developing romance and the jaded actions of those who have been driven to extremes to find a way to demonstrate or retain their own self-respect.

The choreography of movement in and around the stage, as well as some entertaining dance routines, enhances the piece, but the highlight is the element of surprise in the song placement. The strong cast perform these songs with power and verve, particularly when this connects to giving into their teenage needs. Much laughter arises from these often tongue-in-cheek moments that help the storyline to clearly flow and keeps the atmosphere buoyant.

Some touching sections balance the dark humour and allow some much-needed depth to the story: without this, the denouement would be less successful. An entertaining piece with an excellent ensemble, that leaves the audience humming 90s tunes long after the show has ended.