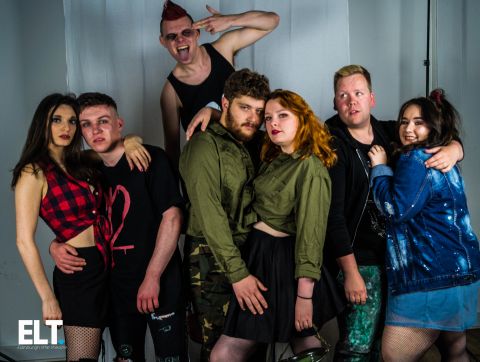 Bursting onto stage with the energetic opening number and wonderfully cheeky audience interactions, the company set the scene for American Idiot. The set suits the show, with the different levels on stage allowing clear visibility of the different scenes.

The three leads playing Johnny, Tunny and Will embody their roles as the disenfranchised young men – in particular, the energy with which Johnny tackles his need for meaning in his life. The supporting leads also work well, with some powerful singing and storytelling, although at times there is some text lost over the volume of the backing music.

What this cast succeed in is demonstrating their full understanding of the lyrics through their physicality and engagement in the storyline. In particular, 21 Guns is a standout, with the clarity and personification of the song portrayed powerfully as the onstage relationships develop and change.

What does not work as well is the costuming of the chorus members, dressed all in black but with their faces completed covered in what resemble fencing masks. This is oddly distracting, despite the well-performed dance routines and singing.

This full-length show, unusual during the Fringe, flies by, thanks to the talented ensemble who make very good work of this demanding piece.