The Greatest Play in the History of the World..., Traverse Theatre, Review 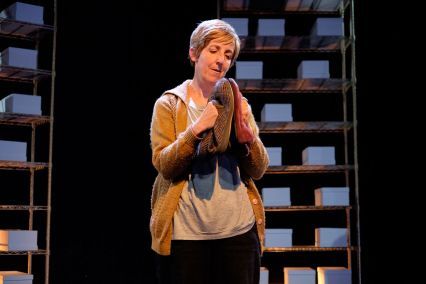 This cosmic love story launches with the Voyager probes hurtling into the outer Solar System bearing their time-capsule golden records intended to communicate to extra-terrestrials the history of our world.

Meanwhile on the usually busy Preston road time seems to have stopped. This is somewhat terrifying to Tom who already fears himself stuck in a rut, his life without symmetry, no ying to his yang, his current state summarised as “Meh”. His interest in the community goes no further than watching the coming and goings of his neighbours. These include the young woman across the street, the Forshaw’s, an elderly couple (with a mysterious garden shed) and the unruly kids at No.58.

These characters and more are realised by the solo actor placing shoes, collected both from racks of stacked shoeboxes reaching to the heavens and from audience members.

We learn more of poetic Mr Foreshaw and his former science teacher wife, who’s health is now failing. Her legendary lesson on the Voyager “golden records” and rock-star scientist Carl Sagan which encouraged the pupils to experience life, to “cram it all in”. Tom peeps on the young woman opposite, her life also stalled, her heart smashed to bits.

With nothing but time on his hands Tom sets out on writing “The Greatest Play in the History of the World”, which will be about his unrequited love for a series of Sarah’s. Like Voyager he seems doomed to drift unnoticed through space – unless someone picks him up.

Through seemingly astronomical chance the characters come together over the local Neighbourhood Watch Facebook Group and blown away wheelie bins. We amass small things, life events, experiences and sensations that could sum up a lifetime and could be “pushed outwards into the inky depths of nothingness for all eternity”. Some things might be written in the stars.

Told with boundless warmth and good humour this is a gentle tale of love (both lost and found) and what will happen when we are gone. It’s a Jackanory of a story, sometimes feeling like it might be suited to a young audience (although they would be unlikely to know of Carl Sagan). The shoes, cosmology and eternal recurrence theory seems a bit cobbled together and there is slightly too much packed in, but ultimately it is as comforting as a pair of cosy slippers.

As Sagan held of the launching of the Voyager “bottle into the cosmic ocean” it says “something very hopeful about life on this planet.".