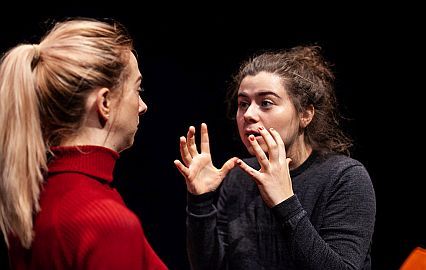 When it’s the centre of your universe, doubting the existence of extra-terrestrial life can never be a good thing.

We join two data analysts (or radio astronomers – it’s a touchy subject) as they stare into space. Or rather, they listen as their task is to passively monitor for contacts rather than to actively beam out a signal.

It’s been two and a half years, and so far, all they have discovered is that they have got mice. The somewhat panicked reaction to this by one of them leads to questions on how they would react to aliens showing up. But it should be alright, as they have protocols.

One thing that seems certain is that they have been here too long. Bored and a bit stressed they fill the void by playing games, drinking tea, eating Jaffa Cakes and pondering the meaning of it all. On one night, “shitter” than the rest, they argue on the purpose of continuing when there are one billion trillion stars and no credible evidence.

The search may define them as humans, akin to a spiritual discipline if they can find the devotion to go on. The chance of a discovery haunts their dreams and when a new blip is found 12 hundred light years away they swap outlooks - this could mean we really are not on our own.

When the power goes out all they can do is wait to check the results. This could mean fame, prizes, champagne receptions …. or just another round of charades and tea.

It’s a neatly devised concept dealing with outer and inner space and is nicely played with the easy odd-couple humour of people who have really spent too long together.

A pleasingly gentle rumination on hope, devotion, perseverance and being human.