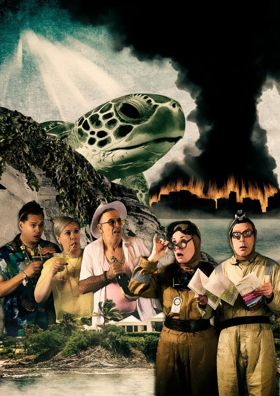 As we trudge through our muggy, too-hot-for-the-Scots-but-can’t-complain summer Morna Pearson’s new comedy with songs, Let’s Inherit the Earth could not be more timely. A topic usually avoided by thespians - particularly in the fast-paced, competitive platform that is the Edinburgh Fringe Festival - this new punk rock musical piece is determined to be heard.

Pearson’s new climate-change comedy compares how both Swedish and Scottish classes respond the inevitable and undeniable signs of climate change. This divide between both nations and classes not only highlights the enormous baring capitalism has on the downward spiral our earth is facing, but also points out how late to the environmentally conscious party our nation actually is.

Opening with a Blue Planet inspired scene, seeing a turtle coughing up a popular supermarket carrier bag, it is clear from the off that Director Ben Harrison means business. That being said, it is alarming to see the quantities of plastic used within Ulla Karlsson’s design, including a backdrop that appears to be covered entirely with scrunched white plastic sheets.

It is safe to say that many people - especially fun-hungry Fringe-goers - would not attend a show intent of preaching to you about your carbon footprint, therefore it is a valuable decision to punctuate Let’s Inherit the Earth with bold, accessible punk songs. However, it is disappointing that their incorporation didn’t spread further than to cover clunky and time-consuming scene changes. Not to mention a lack of vocal musical direction, opting to use simply wail the catchy lyrics making ‘punk rock’ as an excuse to place focus during musical numbers elsewhere. Whilst the performances of the cast are well-received, there is a sense that they are still finding their feet. Being in the early days of its run this hopefully will abeit quickly to reveal the essential nature of this production.

As we all mop our brows, abandoning the umbrellas and parkas for shorts and t-shirts - constantly aghast at how we’ve had more than 3 days of summer - we cannot avoid this topic any longer. The collaboration between Scotland’s Dogstar Theatre Company and Sweden’s Profilteatern shows great promise and the wake-up call our country needs, and hopefully with a few more performances to iron out the creases Pearson’s new punky planet conscious play will turn heads and change fatal behaviours.