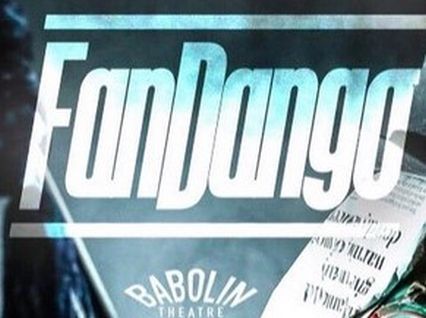 Amidst strewn cardboard packing boxes, the cast gradually regain consciousness. “What a night!” groans Tom, playing a father, whose life is in tatters. But we are getting ahead of ourselves, and so are they.

It will become apparent, if not clear, that Tom’s wife has left and replaced him, that his daughter’s wedding featured a fancy-dress party and that fears have been shared, inner divas released and rebellion flirted with.

Tom, with an affinity to Mercury, the god of messages, commerce and financial gain, runs a packaging company. That clears up the boxes. Or it would if he could keep the rest on track as they break out of his round of song and into snippets of pop.

His packing and his consumerism comes under scrutiny, both his habits of buying everything online and the businesses’ measures to reduce plastic waste. Worse is to come however, as he is interrogated on his fears – loneliness, loss, longing?

The others are enticed into exposing their own fears, but also what they could be if they were successful; beautiful, and in doing so transform to their prima donna selves.

Mercury rises when both old and new husbands turn up to the party as Freddie Mercury (who once had a job stacking boxes) and indulge in a bit of a quarrelsome fandango. With a few more gods thrown in (including at least half a dozen variously spelled Poseidon), a Siren and a shoal of illuminated plastic bottles for good measure, there is a call for direct action on cleaning up the oceans.

Like the opening scene, as an Odyssey it is messy, and without a clear narrative one can only pull bits of understanding from it. Not that it isn’t fun to watch, with confident performances, the usual inventive visuals, choreography and well sung soundtrack, there are things to like.

The Company’s productions have a trademark of being wacky but seem to be becoming more and more abstract, moving away from a backbone of fantastical, almost saga-like story. A lot can change in the gestation of devised pieces, but this doesn’t appear to be the one that was promised.

FanDango is a fair piece of theatre and worth seeing if you are a fan of Babolin’s work, but it’s not magnifico.