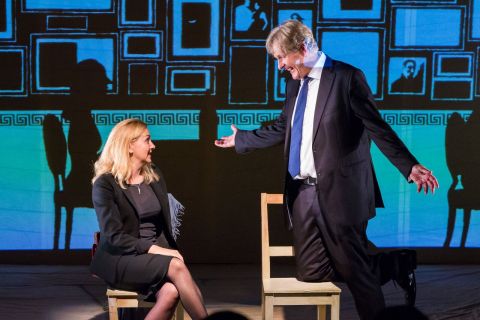 After seeing this exquisitely crafted, polished diamond of a play, you will surely wish to rush out to buy a copy of the original Verse Comedy by Christopher Reid (2009). Robert Bathurst (Cold Feet, Downton Abbey) and Rebecca Johnson (The Trip, The Flood), play the unnamed characters – He, a publishing editor and She, his former lover, who left him to marry a successful novelist and now living in Paris. Fifteen years on, water under the bridge and all that, forgive and forget, so they arrange a tête-à-tête date for old time's sake.

The stage is set with two chairs placed far apart in front of a large screen on which a most charming animation film is shown to illustrate each revolving scene from the publishing house to the Italian Ristorante. He describes how he is leaving his office to go out for lunch, “I may be some time”, as quirky images flash behind, birds, cars, cabs, passers-by as he walks through the streets of Bloomsbury to Soho. He’s in a happy mood, hopeful that this lunch might rekindle their romance. En route are the literary ghosts preserved by blue plaques, Virginia Woolf .. “And there goes T.S. Eliot, bound for his first martini of the day. …”

Arriving at Zanzotti’s (their former favourite haunt), the backdrop illustrates the tables, a wall of portraits and chorus of dancing waiters, with a soundtrack of muffled voices, laughter and buzzing ambience with a realistic sense of place. He gives a running commentary about his love sick emotions at meeting her again, “What will she look like?” On screen the cartoon waiter brings a bottle of Chianti and opens it (cue - audible cork pop) while he snaps a bread stick to calm his nerves. Then she is suddenly there, elegant, slender in a navy blue suit, wrapped in a pashmina, glossy blonde hair, “her aura a waft of wealth.”

And so their lunch begins in gentle, genteel fashion, the poetic narrative a literary treat, every word and nuance, precisely placed with humorous asides to reveal his innermost thoughts. Annoyed by an unappetising pizza, “a wheel of gluten-smothered dough singed at the rim,” he glugs back a little too much wine, “his male gaze through an alcoholic haze.” Across the table, her feminine beauty throws him into daydream, awkward moments of silence, Pinteresque pauses in their dialogue of evasion. The language is short, snappy small talk with subtle questioning - the conversation may be slim yet it implies so much.

There are easy comparisons to be made to T. S Eliot whose autobiographical The Cocktail Party is also a verse drama focusing on the failing marriage between Edward and Lavinia Chamberlayne. Harold Pinter’s Betrayal, a tragic, tortured tale of a love affair in reverse is also set around the London Literati.

This intimate, bittersweet play is elegantly directed by Jason Morell like a slow waltz, the narrative flowing along with lyrical rhythm, while the imaginative use of the film backdrop is a joy to observe. The quiet, reflective performances perfectly capture the nostalgic poignancy of time past and love lost. As seductive and delicious as escaping for a long boozy lunch on a weekday afternoon.