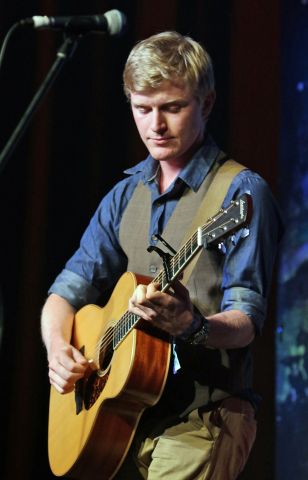 Matthew Dames thrilled his audience at St Vincent's last night in his hour-long concert of twelve carefully selected songs. With each song he gave a short explanation and often asked the audience what they knew of either the composer or the very song he was to sing.

Towards the end the audience had its choice of what he was to sing. There's something endearing but thoroughly professional about Matthew. He's a similar face on the streets of the Fringe last year and now he's back in Edinburgh for more. He had chosen the beautiful St Vincent's Chapel for its amazing acoustic and, much to his joy, there had been no need for amplification.

Matthew was brought up in Cambridge in England but now lives and works in Launceston, Tasmania. His debut album Cold Stars was released in December 2013. His latest album Walk with Me was released in December 2015. Matthew was the winner of the 2015 Liz Johnston Memorial Award for Vocal Excellence at the National Folk Festival. He also won the Tamar Valley Folk Festival Youth Award with his song Climbing Mountains in 2012.

Matthew performs again on the next two Wednesday evenings at St Vincent's. I thoroughly recommend the pleasure you'll get.