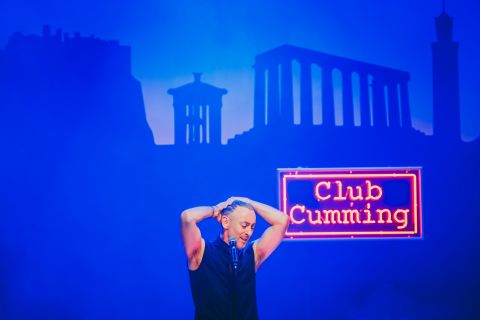 The banter is openhearted and painfully honest too – he admits that he first came to the Edinburgh Festival when he was 19 with his barely-remembered double act Victor and Barry. There are stories about his tattoos, about his long lost grandfather and the abusive father who disowned him, how he flopped on Broadway in The Threepenny Opera (and sings an affecting number from it that’s not Mack the Knife), and palling around with Liza Minnelli and Rufus Wainwright.

It’s been no ordinary life. And the songs aren’t ordinary either. There is Wainwright’s Dinner at Eight, Adele’s Someone Like You, Billy Joel’s Goodnight Saigon and Michael Marra’s Mother Glasgow and later on the darkly bitter Ladies Who Lunch which Elaine Stritch made her own.

It’s a night rich in laughter mixed with tears. The songs are not sappy at all and, Alan, neither are you.

Tickets: available on the door for £10 (cash and card) or book online.