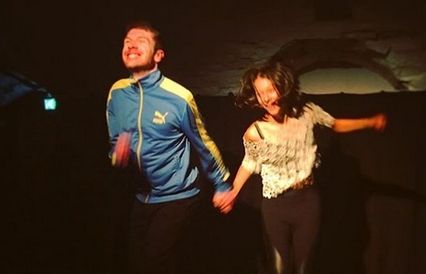 Now tonight is one for the cultural socionomical history books, tonight of all nights, tonight and only tonight, Wednesday 11th March 2015 is what is known as Yokes Night!

So says Harry, our mad-for-it “humble narrator”. Yokes are pills and the Irish government has f’d up and left a legislative loophole that makes all drugs legal for 24 hours. There is no way that Harry is going to spend this special evening in front of the TV when he could be lawfully out his binner.

In the club the house music is pumping. And there she is, Saoirse. With the body of Christ and the legs of Tina Turner, she could just be “The One”. And she is interesting too, challenging, with more to her than meets the eye. Harry is moreish, and they embark on a loved-up tour of the city.

The evening is about more than ‘yer yokes, yer cokes, yer yips n’ pips’; it’s the catalyst to a youth revolt, a big FU to the baby-boomers, the government, those who raised prices and have left Dublin bust, addicted - a city of vacancies and economic famine.

As the couple bounce and spark, the getting to know you small-talk gets bigger, darker and searing secrets leak out. It appears that Saoirse has also been screwed over, both by those she trusted and the state. On this radical night revenge on one particular representative of the International Monetary Fund is in the air. Memories are coming back and in their very own Chamber of Rights they plan to make it a night to remember.

This fast paced, poetic production buzzes with the energy of that crazy night and the younger generation’s frustration at the actions (or inactions) of the Irish government and adherence to outdated notions. Great, engaging performances are helped by a simple but effective set of movable graffitied “breeze blocks” and a clever overlapping soundtrack.

The denouement is perhaps a bit obvious and the game-show trial is a little over-used device, but it remains a show to rave over.