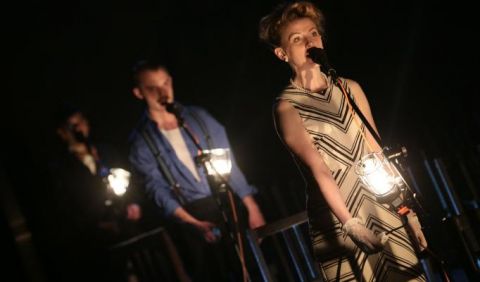 If you’re expecting a Dickens, don’t. This may bear its name and follow its plot, but Blood for Blood is unlike any Dickens you’ve probably ever seen.

The stage is already full, even without actors. More than forty chairs stand in rows across the entire stage and make it look somewhat like an army barracks, or maybe a theatre. As the characters appear in their twentieth century costumes and hum into microphones each lit with their own spotlight, the performance takes the shape of a film noir.

It is refreshing to see a Dickens story not in a Dickens setting. But the way it is done with its noir look and its cloak and dagger feel, it comes across as more of a le Carré than a Dickens. This may have something to do with the low hung lamps that light the stage like those in an interrogation room, or the swagger with which the characters unfold their scheming, dangerous plot, full of hidden identity, revenge and passionate love.

The chairs covering the stage, after the initial admiration of style, become somewhat intrusive. They do not hinder the actors as much as it may seem, but when there are three chairs between two characters they break up scenes and are physical obstacles in the way of the performance.

An interesting take on a classic story, excellently acted. Don’t go for the Dickens, go for the story.